In both contests, it is expected to be around 40° and clear as such, it is not expected that either game will be affected by any weather. That said, in Denver, it is supposed to snow later in the evening and if you know Colorado, then you know that the weather can turn at any moment. If it does snow, that is a huge advantage for Brady. Aside from that, enjoy the games today and be sure to check back tomorrow as we will be releasing some of our NBA content beginning tomorrow. For more information just come here.

Now for the part that we know you have all been waiting for, give me the lineup that will win. I know, I know, we have done this quite significantly in the past and now we have our lineup analyzer providing automatic lineup recommendations but what do I think. Here are my top 3 lineups on Draftkings:

On DraftKings, we have several key factors to consider in making your final NFL selections of the season but by far and away it’s all about the matchups. CJ Anderson has owned the Patriots and the Pats are giving up the most rushing yards per game of the teams left while the Broncos want to run the ball.  Edelman and Gronk have gone for at least 20 points against Denver in each of their last 3 games against them. Last you have Stewart, while Arizona is a tough defense and a great run stuffer, face it, J-Stew, went over a hundred yards on the Seahawks last week, who hadn’t given up a 100 yard rusher on the road in over 2 years. Now to take all of these guys you have to have a #Sleeper and for today, we are going to roll with Cory Brown as the extreme sleeper. While he might not pay huge dividends if he gets 10 fantasy points, your other players are going to ensure success for today. It should be noted that we do have one TE stack of Gronk and Olsen, which might be the best play for today!

FanDuel lineups for the week below:

On FanDuel, we have a bit of a different story in that we are hedging at QB with a slight split for Gronk and Olsen, based on the QB for that lineup. As you can see it’s the Patriots defense across the board and that is really just because the Broncos offense hasn’t been very good with Manning this season and it is projected to be high scoring in Carolina. So we take the value pick here that has the best matchup in terms of which team has given up the most fantasy points to the opposing defense this season.

Don’t forget to come back tomorrow as we release our initial NBA offerings with many more updates coming over the next several weeks! Want me to review your lineup for today, just tweet me @TheDiRTCanon and I will give you my thoughts. 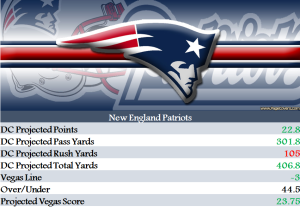 As we look to breakdown the first matchup of the Conference championships, we start with the New England Patriots. As you can see our DiRT Canon projections have the Patriots favored in every team category with the exception being in rushing yards. Given the past of the Patriots, they might not even run the ball 10 times in this game and just let Brady do his thing in the short to intermediate passing game. This means that Edelman and Gronkowski would have huge games. In fact, let’s take a look at the player breakdown for the Patriots next.

While Brady might only be 2 – 6 in Denver over his career, from a fantasy perspective, his numbers have been more than adequate in the previous few seasons. Having a Patriots stack this weekend is a strong play but also an expensive play with each player being towards the top in terms of salary cost relative to their position. The exception as pretty obvious is going to be James White. Don’t look for much production here unless he breaks a couple of long ones but rather expect Gronkowski and Edelman to get at least 25 combined targets in this game. Now let’s transition over to the Denver Broncos.

The Broncos have the opposite affect and really that shouldn’t be unexpected when only considering statistical information. Simply put, Peyton Manning had an awful statistical season and therefore the team wouldn’t have high projections of output when considering the immediate history. That’s why I wanted to give you a full breakdown and include a bit more for you this weekend. As we look at the team stats, the Broncos are expected to score the least amount of points of the 4 remaining teams according to both Vegas as well as DC*3PO. The main exception is in the run game for Denver with the Broncos projected to out perform the Patriots in that category this weekend. Aside from that, at the team level, statistically speaking the check marks go to the Pats.

As we look to breakdown the Denver players for this game, there are two strong considerations in CJ Anderson and Emmanuel Sanders. Some interesting facts about the rest of the key fantasy contributors are that Manning only averaged 7.1 fantasy points per game at home this season. Ronnie Hillman is only slightly below Anderson with a 19.1 average over the last 2 games against the Patriots. Last we have Thomas…..oh Thomas….can he even catch the ball anymore? That doesn’t mean he won’t get his opportunities but a fun fact in researching his stats for the year, the key metric that leads me away from him this weekend is the fact that New England held him to 4.6 fantasy points in their game earlier in the season and that was the only game in which Thomas didn’t reach at least double digits. Instead it has been Sanders in the passing game and for the price and value, he is the stronger play this weekend.

In our NFC Championship game, we have what is expected to be a higher scoring contest. It doesn’t mean closer as Vegas has both of these games at only a 3 point difference and in this case the home team has the edge. The Panthers come in only having lost 1 game all season and while they ended the game last week having given up 24 unanswered points, they still won by 7 because of the absolute demolition in scoring 31 first half points against the vaunted Seattle defense. The reality of that game is that Carolina played to not lose in the 2nd half knowing it would take a small miracle for the Seahawks to come back and so why take unnecessary risks. I agree with that strategy in the long run but we wouldn’t even consider the Cardinals in this matchup if they had continued to destroy Seattle.

So let’s breakdown the visiting team stats again with the Cardinals and how they stack up against the Panthers. All signs lead to a close one with kickers having a role. The projected Vegas outcome of this game is Carolina 25.25 to Arizona 22.25 as the over/under is set at 47.5 according to FiveDimes. DC*3PO isn’t all that much different with the same projected outcome, Panthers win but by an estimated 4.4 points instead of 3 like Vegas. From a fantasy perspective it should be noted that our DiRT Canon projections show that the Cardinals will throw for the most yards this Sunday but won’t rush the ball with much success. As we move into the player analysis for the Cardinals, this means that Palmer is a strong consideration for top QB of the week and really he should be. All season long, he has been in the top 3 in QBR, TD passes and total passing yards. He continued that last week with everyone in the ESPN community stating how terrible and awful he was but from a fantasy perspective, he put more fantasy points than Brady when the game was all said and done. All he did was go over 300 yards passing again and threw 3 TD’s with the last one in OT to bring the Cardinals home with a victory. Beyond Palmer however, there isn’t much else to look at when considering the previous matchup points. Not a single player is averaging more than 7 fantasy points against the Panthers but that is only a one game sample with these teams not playing each other very often. In looking at their away stats, you would lead with Fitzgerald then Brown and finish with Floyd. So if you are taking Brown to score more than Floyd, this is the week to make that selection as the deep ball is very much in play and that is John Brown all day as they say.

Now let’s get to expected winning team, the Carolina Panthers. From a team projection standpoint it is pretty much a 50/50 split, the Panthers will be able to run the ball and the Cardinals will throw it. What that really means is that if the Panthers can control clock, like they have done all season, run the ball with the effectiveness that they have had all season, they might run out to a big lead again and then have the Cardinals make a late run at them. It is very unlikely that you would get to see them put up 31 points in 22 minutes like last weekend but could it get to 20 – 3 or around there by half time, that is definitely in play here.

From a fantasy player perspective, there really hasn’t been very many Panthers all season to hang your hat on outside of Cam. While he is the top projected QB at DiRT Canon, he should be considered for all of his play making ability. Just don’t be surprised if he throws for a couple hundred yards, runs for 40 yards and gets a TD. That won’t have him as the top QB this weekend but that might be enough to win the game itself. I have him as the #3 QB behind Palmer and Brady but the numbers are certainly in his favor. Some other key considerations for the Panthers would be Stewart, who looked amazing against a Seattle defense that absolutely stuffed Adrian Peterson the week before, and then Greg Olsen. Olsen has not had very much success against Arizona in the past but he is the most consistent guy in the Panther passing game. Something of note in researching the past is also that Ted Ginn has only 1 game against Arizona and had a -1 point performance in that contest but at home this year has averaged 12.5 fantasy points per game.

All in all, I am actually going to go with the Cardinals in this one to upset the Panthers and we will have both #2 seeds making it to the Super Bowl. There isn’t anything that definitively points in either direction but I like the overall team of Arizona, they have a lot more play makers on offense and if they can keep the rushing attack somewhat under control, I think Palmer hits a late TD and they win 30 – 27. Don’t forget to check back on Sunday as we will reveal our final NFL experts fantasy picks for the season as we look to have our first version of NBA ready for you next week!

Get your full FanDuel reports for this week here.

Ger your full DraftKings reports for this week here.

We want to hear from you, please take all of our polls here.

The FSTA has built a grassroots website, FantasySportsForAll.com. I encourage you to go there now, while reading this and sign the petition.