In recapping last night’s performance, it was an interesting night as Robin Lopez took down the center position as we outlined for you and Anthony Davis proved how valuable he really is in today’s NBA. Lillard ended up being a strong play at PG along with Gerald Henderson proving his #Sleeper status that we identified for you in this post yesterday. Tonight has a full slate so a ton of options for tonight! Now, I will walk you through 5 key points and end with The DiRT Canon top lineup for both FanDuel and DraftKings, along with the lineup analysis for you to consider tonight!

I wanted to add some additional value player to our list today as these players are within our variance threshold but also have a projection of at least 30 fantasy points for tonight. This should help you with your player selection for tonight as these are guys with great matchups and should have solid performances relative to their assigned salary. Those players are as follows:

Below are our top 5 players when considering all of our custom metrics such as big play potential, projection to spend ratio, overall projection and opponent rank:

The stack considerations for tonight are in the SAC vs. CLE and OKC vs. PHO matchups as they are the two highest projected totals according to Vegas. Both come in at 215 and 217 projected total points. In terms of individual team scores, Vegas has Cleveland as the top scoring team at 115 and OKC just behind at 114 points. 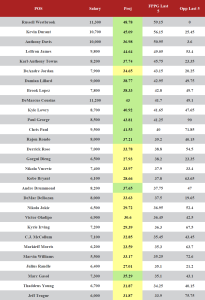 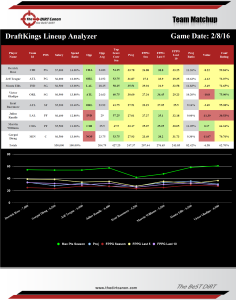 Rather than describe this particular lineup, I figured I would try something a bit different and just give you a few of the top lineups for various reasons and let you check out more than one lineup from us today.

On FanDuel, there are a lot of solid plays from Aaron Gordon to Stanley Johnson. You can take chalk plays of Westbrook and Durant or go value with Teague and Rose so you can spread the wealth to all positions. As we have done for DraftKings, here are 5 lineup considerations. To download a copy of each of the top 5, just click the link below: 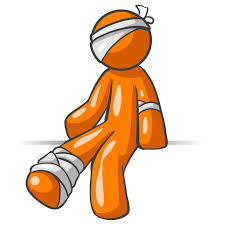