In recapping last night’s performance, it was an interesting night as Robin Lopez took down the center position as we outlined for you and Anthony Davis proved how valuable he really is in today’s NBA. Lillard ended up being a strong play at PG along with Gerald Henderson proving his #Sleeper status that we identified for you in this post yesterday. Tonight has a full slate so a ton of options for tonight! Now, I will walk you through 5 key points and end with The DiRT Canon top lineup for both FanDuel and DraftKings, along with the lineup analysis for you to consider tonight!

I wanted to add some additional value player to our list today as these players are within our variance threshold but also have a projection of at least 30 fantasy points for tonight. This should help you with your player selection for tonight as these are guys with great matchups and should have solid performances relative to their assigned salary. Those players are as follows:

Below are our top 5 players when considering all of our custom metrics such as big play potential, projection to spend ratio, overall projection and opponent rank: 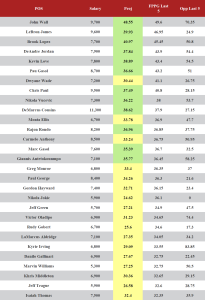 Some key highlights from this would be that there is not a single player averaging over 50 fantasy points over their last 5 but Wall does lead this list at 49.6 and his opponent Philly, is averaging 70.35 over their last 5 to the PG position, that is top Chalk!

For DraftKings tonight, we are rolling with a John Wall and LBJ combo breaker. Having these two players should get you between 100 and 115 fantasy points tonight. As we look to save at SG tonight, we are going to go with E’twan Moore as we know that Butler is going to play tonight but Moore should still start and with some uncertainty with regard to how much time Butler will actually see combined with playing the Nuggets awful defense, look for Moore to get 22 fantasy points tonight. Next we have our top value play at Center with Robin Lopez and we expect to see 31 fantasy points out of him tonight. Danny Green is going to see extended minutes with Manu Ginobli sidelined for at least 6 weeks so Green could get to 25 fantasy points with high upside if he gets off to a hot start from the 3 pt line. Next we have our Mavs for tonight in Dirk and Zaza, both of which have averaged right around 30 fantasy points per game for the season and both should hit the double-double mark. They do play the Spurs so this will not be a high scoring game but both of these guys should be right around their season average of 60 fantasy points combined. Last we have a sneaky play in Michael Kidd-Gilchrist, since coming back from his injury is averaging just over 31 fantasy points per game and this should continue tonight. So considering injuries, this team will come in with a projection of 284 and that should cash in both tournament and 50/50 play tonight.

For FanDuel tonight, we are also going to roll with many of the similar guys in that we have John Wall and LBJ combo and they should still hit for around 110 fantasy points on FanDuel. Our other PG is going to be Ish Smith who if he continues his production and playing in the highest scoring game, he should get to 36 fantasy points tonight. At SG we are going with our top value and solid play of Monta Ellis along with Moore again here for low salary and value. We expect to achieve 60 fantasy points between these two players tonight. Our other SF besides James is going to Deng. Deng has quietly been posting right around 30 fantasy points per game of late and we expect similar production tonight. At the PF position, we are going back to Aaron Gordon who had an awful performance last time out but that was on a back to back so we will give him the benefit of the doubt and expect him to get 26 fantasy points tonight alongside Aldridge who finally showed up in his last contest, going for over 50 for the first time this season. We would expect 40 fantasy points from him tonight so a total of 66 from our PF’s tonight. Last we are rolling with our value play at Center again in Robin Lopez as we should see 31 fantasy points from him again tonight. That makes this team considering matchup and injuries, projected at 333 fantasy points and that covers our 315 mark so you should be good to go in all formats here.