In recapping last night’s performance, Wednesday was a lot of action with not a lot of big results. Last night marked the first time that we didn’t have at least 4 players go over 50 fantasy points in a single night during the month of January. Instead we had a bunch of guys in that middle 30’s to mid 40’s range with players like Farried & Hayward putting up solid numbers. The big guys in the Philly vs. Pistons game were the guys to have as Noel and Drummond both had monster games. Most winning lineups had Archie Goodwin even though he only produced 20 fantasy points where as Klay Thompson reminded us of his ability to score throwing down 45 actual points and going over 50 fantasy points for the only the second time this season. Now, I will walk you through 5 key points and end with The DiRT Canon top lineup for both FanDuel and DraftKings, along with the lineup analysis for you to consider tonight!

Below is the average fantasy points per position for both FanDuel and DraftKings based on the minimum winning score for each site. This should give you an order to your lineup selection process.

The average winning score over the past 7 days has been 327.4 total points.This is the highest that we have seen since we started tracking this number at the end of last season. So tonight it is all about contest selection in terms of making solid plays tonight. Thursday is FanDuel Night as such there are several TNT contests and the $2 TNT Slam is our favorite but it will have an average score that is slightly higher than the rest. Tonight you should be looking at the $25 TNT 250k Slam with that having a slightly lower average winning score at 312.1 this season.

The order for player selection for tonight you should be looking at filling your SG position and PG position with top end players. Cousins is in play tonight so he is always a strong consideration but if Anthony Davis isn’t going to play then taking Ryan Anderson at PF is a very good play on DraftKings. 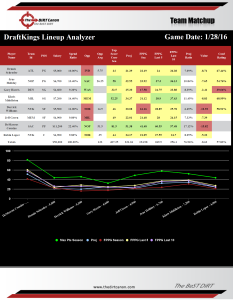 For DraftKings tonight, we are going to roll with our #AbsoluteMustHave of Cousins and we should expect at least 50 points out of him again tonight. Then we are going to roll with Holiday as our #AbsoluteNotable as we expect him to be the top performer at PG tonight. We will take a run at Lopez for Center and our top sleeper play of Gary Harris at guard. Then we will take a chalk play of Khris Middleton and take a risk with Shroeder and Jeff Green tonight. The last position is Derrick Williams and if you read earlier in the week, then you know that Williams is always huge whenever Melo sits out this season. In fact Williams should go for around 40 fantasy points with Melo out again tonight and this should get us around 270 fantasy points. Based on our projections, the needed score to win tonight is only going to be 258 in all of the main 50/50 contests so you should be able to hit some fairly large ROI for tonight with this lineup.

For FanDuel, we have very consistent lineup with a projection of 266 and a last 5 game average of 278 fantasy points. With the needed points projected to be at 327 fantasy points tonight, the ceiling for this lineup at 464 fantasy points is one of the highest we have put together this season. Taking the players of Holiday and Rondo with DeRozan and Butler, this should create very high value and should produce over 200 fantasy points at the guard positions. Some key notes here is that Mirotic is out indefinitely and that means more scoring for Butler and in Toronto we have a game-time decision for Kyle Lowry, if he doesn’t go then DeRozan is a must play as he will have to do all of the scoring and that means he will put down over 50 fantasy points for sure. Casspi will get the nod again tonight with Gay out, Randle and Cauley-Stein very high value plays for tonight with Robin Lopez taking down the center position.