Posted on January 26, 2016 by John Beckwith sports Aside

In recapping last night’s performance, if you followed our secret sauce, you would have been in the top 500 out of 180,000 entries on FanDuel and just as good within DraftKings. The key takeaways were our value playes of Hawes and Ariza, then Cousins & Rondo as our combo players. Then having T.Thompson, who put up a nice double-double last night with Towns on DraftKings and you have a pile of cash to play with tonight. Now that you have all the information at your fingertips, it’s time to build your lineups for today. I will walk you through 5 key points and end with The DiRT Canon top lineup for both FanDuel and DraftKings, along with the lineup analysis for you to consider tonight!

Below is the average fantasy points per position for both FanDuel and DraftKings based on the minimum winning score for each site. This should give you an order to your lineup selection process.

The average winning score over the past 7 days has been 314.9 total points. With Center leading that production, keep in mind that Cousins is listed as a Center on FanDuel and he had another massive performance yesterday making this position when considering who is available for tonight really mean you can only take Cousins here. Shooting guard did have a slight come back with Harden putting up solid numbers yesterday but in order for tonight after Cousins, you should go PG, PF, SG, SF. At SF if you are taking Durant or Melo as your chalk play, then you will need to be sure to get two solid mid play guys at PG tonight such as Carter-Williams and Jordan Clarkson.

As you should already know, the bonus plays for 3pt makes along with double-doubles and triple-doubles, the wing players should be more predominately selected in your DraftKings lineup process. Identifying players that have the best chance for hitting these thresholds, should be in your consideration moving forward. It should be noted that it is almost non-existent to have two C’s on your winning lineup.

As you can see Chris Paul & DeMarcus Cousins should be considered for your chalk plays tonight!

Point 4 – What Contest should I play:

In this section, we will identify the contest that has the lowest score to win combined with opportunity for you to make the big bucks each day. We will also hedge this contest with another option if the contest is a main contest. 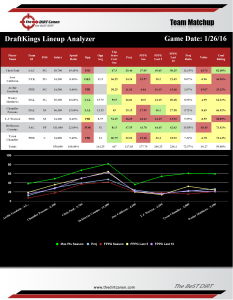 As you can see we are going with Cousins again tonight alongside our triple-double threat of Chris Paul. We are surrounding these guys with a ton of high value and upside with Goodwin, Calderon and Tyson Chandler. Then we are adding Wesley Matthews and Chandler Parsons as they have a solid matchup against the Lakers tonight. This lineup should reach our 280 threshold with ease tonight and with a ceiling at 447, this is very high upside potential. The only play in this lineup that is “iffy” tonight is TJ Warren. He has been a roller coaster this season but with the 76ers on the docket that usually bodes well for offensive production and so he will get his shot at playing time tonight. If the game gets out of hand, look for Warren to shoot it a ton as our gut call has him putting up 25 fantasy points tonight. 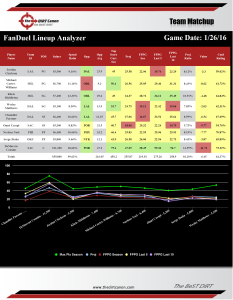 With Cousins at Center tonight, we wanted to go with a solid back court of Clarkson and MCW. Khris Middleton has been highly productive of late and is averaging over 36 fantasy points per game over his last 5 contests. This means score and score often for Middleton. Omri Casspy will be highly owned tonight with Rudy Gay missing action tonight and Casspy expected to regain his starting role. In games where Gay hasn’t played Casspy has only gone under 30 fantasy points in 1 of 8 of those games so he should be a solid play at SF tonight. Ibaka is the most sure thing guarantee we can give you at PF tonight and we are going to combine him with Nerlans Noel but Chris Bosh and Porzingis are also strong secondary plays for the PF position tonight.