Posted on January 25, 2016 by Logan Cartwright football, nfl Aside

In the 17th and quite possibly the final edition of “Manning versus Brady,” it was Peyton Manning and the Broncos emerging victorious over Tom Brady and the Patriots in the AFC Championship Game. Manning completed 17 passes for 176 yards and threw two touchdowns, both to tight end Owen Daniels. Daniels caught a 21-yard touchdown pass in the first quarter and a 12-yard TD pass in the second quarter, and those were his only two receptions of the game. Daniels tied the NFL postseason record for receptions in a game, all of which went for scores, last done by the Colts’ LaVon Brazill, also against the Patriots, in the 2013 playoffs.

Daniels is the fourth player to catch two touchdown passes from Peyton Manning in a playoff game. The previous three did so for the Colts against the Broncos: Marvin Harrison and Brandon Stokley in the 2003 playoffs and Reggie Wayne a year later.

Though a late touchdown pass from Tom Brady to Rob Gronkowski made the final score close, it was a day-long struggle for the Patriots on offense. Brady completed 27 of 56 passes, marking the first time in his professional career that he completed fewer than half of his passes in a postseason game. The 29 incomplete passes on Sunday were also a career-high for Brady in a postseason game.

The Patriots as a team converted two of 15 third-down attempts, good for just 13.3 percent. That’s New England’s lowest third-down percentage in a postseason game under Bill Belichick. The last time the Patriots converted a lower percentage of third downs in a postseason game was Super Bowl XX – New England lost to the Bears, 46-10, and were 1-for-10 (10%) on third downs. 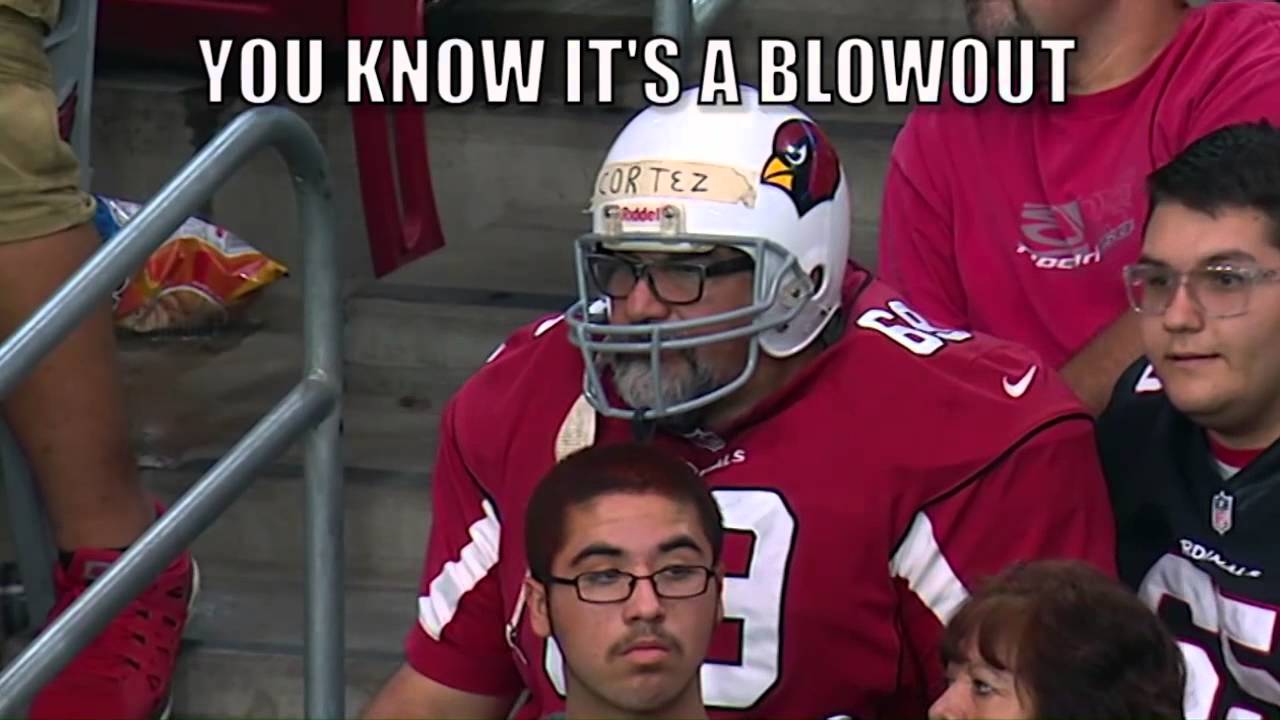 The Panthers are headed to Super Bowl 50 after overwhelming the Cardinals, 49-15, in the NFC Championship Game. The 49 points by Carolina are the second-most scored by a team that clinched a berth in the Super Bowl – the Bills scored 51 points in the AFC Championship Game in January 1991 against the Raiders. The Panthers, who forced seven turnovers in their blowout victory, are the second team in the last 20 postseasons to score at least 49 points and record seven or more takeaways in a postseason game. The other team to accomplish that feat in that span is the Jaguars, who racked up 62 points and forced seven turnovers in their divisional round victory over the Dolphins in January 2000.

Superman Cam is clutch for Carolina

Cam Newton put up an MVP-like performance in the Panthers’ victory, throwing for 335 yards and two touchdowns while also running for a pair of scores. Newton is the fourth quarterback to total multiple touchdown passes and touchdown rushes in a single postseason game. Otto Graham had two such games for the Browns in back-to-back NFL Championships (1954 and 1955). The other two players to do so prior to Newton were Jay Cutler (Jan. 2011 against the Seahawks) and Colin Kaepernick (Jan. 2013 versus the Packers).

Carson Palmer struggled against the mighty Panthers defense, throwing four interceptions and losing a pair of fumbles. Palmer’s six turnovers are tied for the most turnovers by a player in a postseason game. The last player to turn the ball over six times in a postseason game also did so in a Panthers-Cardinals matchup – Jake Delhomme had five interceptions and lost a fumble for Carolina in January 2009 against Arizona. 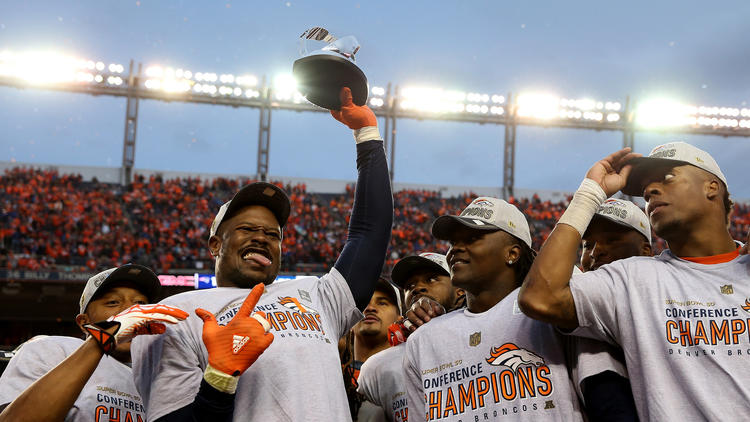 LAS VEGAS – The Carolina Panthers will go to San Francisco favored by more than a field goal to win the Super Bowl for the first time in franchise history.

Oddsmakers didn’t even wait until the Panthers finished off the Arizona Cardinals to install them as favorites for the game against the Denver Broncos on Feb. 7. At most books, the Panthers were a 4-point pick, though the early line varied, with the over/under settling in at 45.

* I wish there had been more time in between games on Sunday. The nail-biter in Denver ended minutes before kickoff in Carolina, and if the game had gone into overtime, that creates a conflict for viewers.

* Anyone else catch Rob Gronkowski complaining to the back judge near the end of the early game? He mimed that the Broncos had basically attempted to murder him, on a play that rightfully drew no penalties. Hey Gronk, there’s another sport where crying and faking does draw penalties. It’s called soccer. Either sign with the New England Revolution, or grow up.

* Cam Newton is an all-pro QB and league MVP, and he played great on Sunday. But I’ve never seen a quarterback so willing to throw a 4-yard pass on 3rd-and-10.

* Get an early look at the 2016 Super Bowl commercials.

The Ghost of Christmas Future

For the third year in a row, the top seeds from both conferences will meet in the Super Bowl. But this result wasn’t as likely as that stat would imply. The hottest teams coming into the playoffs were the Chiefs (on a 10-game win streak), the Cardinals (who lost a 9-game streak with a half-hearted Week 17), and the Seahawks (whose last four wins came by a combined 139-32). The Panthers had a tough road to the big game, and the Broncos just didn’t look particularly intimidating at the end of the regular season.

This is the first Super Bowl for both head coaches, though both have been to Super Bowls in other capacities. The Broncos’ Gary Kubiak becomes the seventh head coach to make a Super Bowl in his first year with the team, joining Don McCafferty, Red Miller, George Seifert, Bill Callahan, Jon Gruden, and Jim Caldwell. Additionally, Peyton Manning will become the oldest QB to start a Super Bowl, breaking the record held by his employer, John Elway.

Denver has a great defense, but this is a bad matchup. The Broncos thrive on pressure, but Cam Newton’s running ability means he can evade pass rushers, and he’ll run through openings if you leave them. The Broncos will get some sacks, but their pressure won’t have the same effect it did against the Patriots. Denver’s pass defense is better than its rush defense, and Carolina is one of the most balanced offenses in the league, with a good ground game. New England prefers to throw, which played to Denver’s strength, but if Mike Shula is smart, I’d expect the Panthers to run about 50% of the time, more if they get a big lead. I’d also look for some sort of trick play to break things open.

The Broncos need to contain the rush, while preventing big plays downfield: make Newton throw short and intermediate passes, string together long drives. He’s capable of that, but the Broncos can’t get run over on the ground, or killed on sudden, momentum-generating big-play strikes. The Broncos have won with their defense all year, and they’ll need a low-scoring game if they’re going to win, so giving up a 50-yard TD would be devastating. Force the Panthers to work the ball down the field, preferably through the air, and hope you can force a couple of turnovers.

This still seems weird to say about a Peyton Manning offense, but the Broncos are best when their offense is smart and conservative, with an emphasis on ball control. You expect to see what the team has shown its last few games. They’ll stick with the run, mostly grinding out short gains to keep the defense honest, and probably break a long one at some point. Manning has to take a few shots downfield, but his role is more to find the right plays and pick up first downs on 3rd-and-6. The priority is avoiding turnovers. The Broncos aren’t going to win a shootout, and they’re not expecting to win with explosive offense; they want big plays from their defense.

Carolina’s priority is probably to prevent Denver from establishing its run game and getting into a rhythm. Don’t make mistakes, and force Manning to win with his arm. The Panthers are effective ballhawks, as we saw in the NFC Championship Game, but they probably don’t need to force turnovers as long as they’re solid throughout the game. They need to be creative enough that Manning doesn’t pick them apart with his calls at the line, but they don’t need to be aggressive, exactly. Luke Kuechly and Josh Norman are terrific players, but Carolina’s most important defender in this game might be Kawann Short. Manning can’t overcome a good interior pass rush.

This might be a small advantage for Denver, which has a slightly better kicker, slightly better punter, and a more consistent return game. For the Broncos to win, they’ll probably need an edge from special teams: a big return or a blocked kick or something.

The three best teams in the NFL this year were all in the NFC: the Panthers, Cardinals, and Seahawks. The Panthers have already beaten the other two, pretty handily, and they’re 4-point favorites to win Super Bowl 50. Denver has a great defense, though, and you should never underestimate great defensive teams in a championship. The Broncos were in the Super Bowl two years ago, so they have Super Bowl experience, which the Panthers do not – not that it matters a damn. And it’s widely assumed that this will be Manning’s last game. I hate to imply that players don’t always perform at their peak, especially in a game of this magnitude, but sometimes you see a little more when emotions are running high. Who’s to say the Broncos don’t find something extra to help the Sheriff ride off into the sunset?

All the intangibles point in Denver’s direction. But the Panthers are a better team. They have a good defense, too, as their seven takeaways against Arizona would attest, and they have an offense that scores more points. Their ground game plays away from Denver’s strengths, and interior defensive pressure could radically disrupt Manning’s gameplan.