Well, well, well…First, the 6 man-NFL-Relocation committee said they approved the Carson project.  Carson, the place that makes East Rutherford look like a vacation destination, is the project that was proposed by the Raiders and Chargers.  Now, the man who has a caterpillar on hgh on the top of his head, just gave St. Louis the double-bird salute, after Hizzoner said the Rams were the team that is moving, and will be moving to Inglewood-up-to-know-good.

Hey Rams fan, he’s just being philanthropic.  Afterall, 20 years ago someone else ripped the team from LA – consider it righting a wrong.  Or don’t.

Kroenke called the city of St.Louis a struggling market – after the city was willing to give Powerball scratch to build him a new stadium.  But really, who needs an NFL Team nowadays.  With the RedZone, and fantasy football, loyalty erodes with every week.  Actually going to a NFL game anymore – meh.

Ram fan, now you can tell your civic leaders to use that scratch earmarked for a new stadium on social issues and maybe stem the tide of migration out of St.Louis.  Think of all the good, a billion dollars could do for the community if you yelled as loud about social problems as you do about losing a team that doesn’t care about you…you’re better off St.Louis, just ask the Wall Street Journal.

Read: You don’t need the Rams or the NFL to be great, St. Louis | FOX Sports

Read: FuQ You, Stan Kroenke, and the Toupee You Rode in Under | Riverfront Times

ANTONIO Cromartie makes a living playing in the NFL for the New York Jets, and while he is an exceptionally talented defensive player, his greatest talent appears to lie outside the world of football.

The 31-year-old has an incredible knack for fathering children, with the announcement on Wednesday that his wife is expecting twins, which would make the new additions his 11th and 12th offspring.

Twelve is a lot of kids, enough in fact to field a full football team plus a kicker, but it’s nothing the world of reality television hasn’t seen before. Alas, the plot thickens.

The real shock comes in the knowledge that Cromartie had a vasectomy prior to his wife Terricka falling pregnant, clearly to stem the reproduction of genetics that has already seen the cornerback father 10 children, including eight from previous relationships. Now that is extraordinary……

America’s Most Watched Network, We get It…

The Super Bowl is turning 50, although the game played next month on America’s informal national holiday will hardly be showing its age because of new gadgetry CBS Sports is debuting.

A replay system will give viewers a 360-degree perspective and higher resolution than previously ever seen for the game. Thirty-six cameras strung around the upper deck of Levi’s Stadium in Santa Clara, California, can freeze the moment and revolve around the play before continuing to show the scene. Viewers on Feb. 7 will be able to check out the quarterback’s view from the pocket to other players’ perspectives on the field, and it can be animated, too.

“We tried it on a couple regular-season games and it looks remarkable,” CBS Sports Chairman Sean McManus said Tuesday at a gathering of TV critics.

For the first time in a Super Bowl, CBS will use eight custom-molded pylons that house 16 cameras to film the goal lines and sidelines of both teams. The cameras also will have microphones embedded in them to enhance the game’s natural sound. They were used in the College Football Playoff championship Monday…… 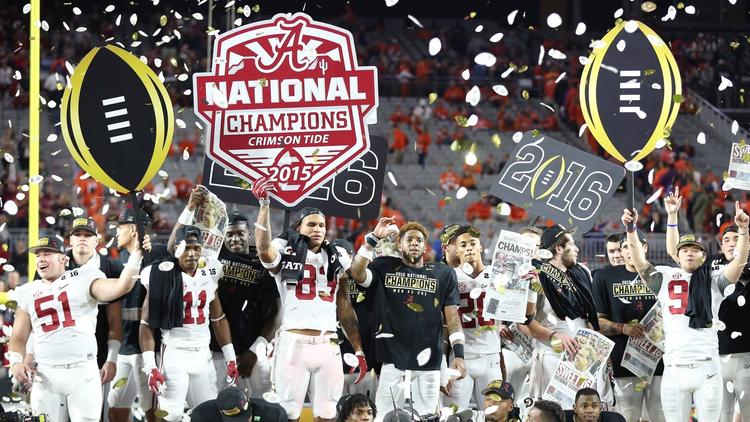 This game was better than good, and it will feed an offseason of unmatched anticipation. Here’s why:

Nowhere to hide: The College Football Playoff selection committee has made it clear that schedule strength is vital. There will be a day when a two-loss conference champion makes the playoffs.

Continue Reading: 2016 college football season could be the most anticipated ever

Given that the American League features both the DH and the Yankees, it makes sense that the AL tends to outspend the National League in free agency. But recently Andrew Beaton noted in the Wall Street Journal something peculiar. For the first time in years, the NL has been outspending the AL in free agency. This made us wonder if NL teams were actually getting more player value for doling out all that cash.

When Beaton looked into this topic a few weeks ago, the NL was outspending the AL by $254 million. Since then, the NL surplus in total spending has grown to $335.2 million, according to FanGraphs’ data. On a per-year basis, NL ballclubs will pay their new free agents about $50 million more next season, as it stands now. Most of the NL’s splurge comes in later years, as huge contracts like Jason Heyward’s are paid out over several seasons.

To see if this spending relates to actual production, we looked at data using FanGraphs’ free agent tracker to determine which league is signing the better players. We grouped players according to the league of their new team, and we looked at 2015 WAR, 2016 projected WAR, current salaries and projected salaries……