Posted on December 31, 2015 by Logan Cartwright sports Aside

For last year’s words belong to last year’s language – And next year’s words await another voice.  We at the DiRT Canon would like to wish you an excellent new year – It’s a lot of fun putting this together and we thank you for joining us – 2016 is gonna rock – in the meantime, take a trip down memory lane and enjoy our “most read of 2015″…

Fear and Loathing at Carnival…

When the going get weird the weird turn pro, as Raoul Duke famously said, and I am a 7-time gold medalist on this caravan.  Still awake and doing my damndest to earn another shot at the medal-stand; I have yet to sleep from properly marking Lundi Gras with a Red Letter and have no plans stopping this party-train until the final whistle of Mardi Gras blows.  But, I do find myself in reflective thought…

Thoughts like did I miss anything on Sunday? Was the ‘over’ in the NBA All-Star Game good? Who invented liquid soap and why?  Where’s my attorney and at what time does this stop being legal?……(continue reading)

A few of us found ourselves within the friendly confines of the DiRT Canon Safehouse on Sunday, with loads of charcuteurie, queso, other roasted animals and an assortment of football snacks to soak up whatever concoctions were being offered in celebration of professional football’s second holiest day. What we witnessed was a referendum on choking and how danger”Russ” it can be.

First the Colts, because that game provided as much drama as I’m sure Taken 3 provided, and why is it “Taken” anything? It should have been titled Murder 1, as in the mom is dead and no one is taken anywhere…anyway…The legacy of the Patriots, beyond the winning, is how they do it.  The Patriots conduct an approach that is different than most teams – meaning they will attack your STRENGTH more often than they will probe your weakness – that’s counter to what most teams do in this league and that is finding your weakest link and exploiting it until the link breaks.  For Wild Bill Belichick it’s different, he will savagely attack the strongest link in your chain.  He doesn’t want the link broken, he wants the whole chain crippled.  That is how the patriots confuse people and that is how they beat Indy’s brains in – like a carnival game of whack-a-mole – Bill took a lead-pipe to the Colts’ passing attack and kept whacking until the deformity was so severe, that the soul of the Colts had to be amputated……(continue reading)

There are many hard lessons to be learned from the “degenerate” experience, but the harshest one of them all is the difference between having Fun and being Smart.  It is the difference between Winning and Losing, on most days, and on Saturday theFinal Four will be a lesson for fun-loving Losers.  It does not matter if you haveWisconsin or Michigan St winning it all.  Nor does it matter if you have Duke orKentucky – the line for both games is 5 and if anyone tells you they know how it all plays out with certainty, well…you’ve been warned.

Saturday has never been kind or forgiving to these people.  They are taught all their lives that Saturday Night is when even idiots can cut loose and take risks that would be out of the question on any other night.  Get drunk, shoot guns, dance naked in public, or even crouch in your basement and hack into the NSA database…

If Sunday is the Lord’s day, then Saturday belongs to the devil……(continue reading)

Source: 3rd Stone from the Sun | The Dirt Canon Blog

Never noticed how much Ryan Leaf looks like Matt Ryan

It has been said that the NFL stands for (N)ot (F)or (L)ong – so I thought we could look at the biggest (NFL)’s by each team, list is compiled by Charlie Campbell.  Be careful, these busts could bring up past feelings of hurt and woe…Let me know if I missed anyone – what are your thoughts?……(continue reading)

To some, this three-day weekend means a break from work, a chance to go camping or maybe buy a new mattress at 40% off.  The last Monday in May is also marked as the official beginning of Summer – hot dogs, BBQ, swimming pools etc…That’s all fine, it’s part of the glory that makes us American – because we can.  As Patriots, we should also take a moment from our leisurely celebrations, to remember those that gave the ultimate sacrifice for this nation, along with the families of those that fell.  To those that preserved this nation, preserved our interests, and preserved our ideals that all men are created equal.  If true Patriotism is loving your country all the time, and your government when it deserves it – as Mark Twain said – then raise a glass to those that help defend and replenish the Tree of Liberty……(continue reading)

Home Teams in the playoffs are now 0-4, and apparently there is a Taylor Swift 1989 tour going around spoiling the fun – Read more about it here.  Take Note Ranger Fan, Swift-y plays in Arlington a week from tomorrow.  As for David Price, he let Rougned Odor and Robinson Chirinos go deep – they are the #8 and #9 hitters – Price is now 0-6 all-time in the #MLBPostseason.  Randy Johnson once lost 7 in-a-row, but I do not see Price changing his spots anytime soon.

The Baseball post-season is now in full-swing – today we have 4 games, and with that, the last time we will have this many games in one day, for the rest of 2015, I suspect.  The BlueJays try to get back on track……(continue reading)

The season is underway and I know you are still looking to become a millionaire, whether you play on Draftkings or FanDuel, let us help. As we look at tournaments to target, build your player profile, we are also going to provide you with our experts’ picks as they bring you #TheBeSTDiRT for building your lineups each and every week. So let’s breakdown week 3 for Draftkings & FanDuel!……(continue reading) 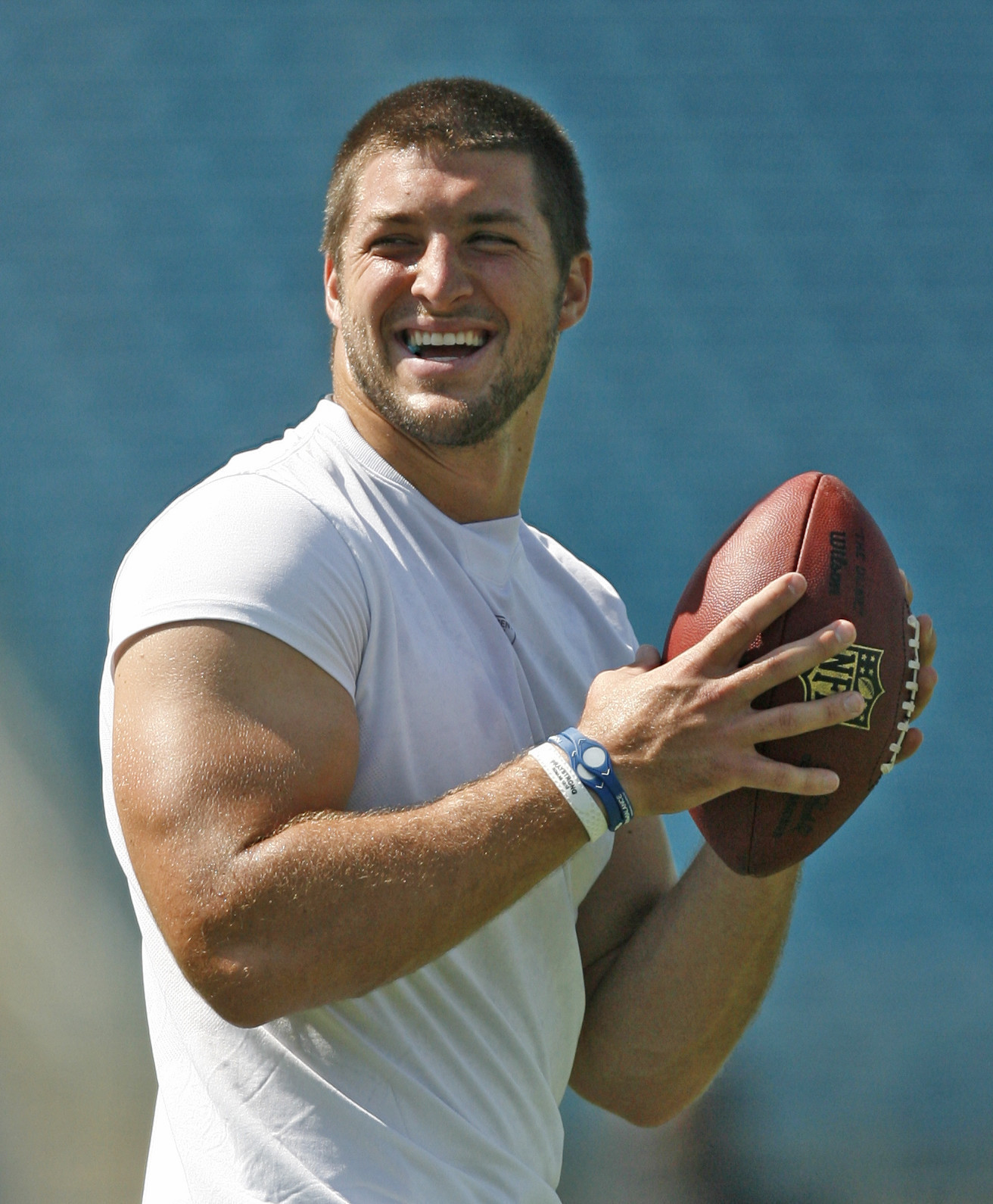 To some, the story goes…In the beginning the Lord created the Heavens and the Earth…and said let there be light, and there was, and it was good…then he decided to create Tebow and made him a QB and it was, meh.  Tim is maybe, one of the greatest college football quarterbacks, based on results, that constantly willed his team to victory, more than his talent.  In the record books, Tim has one-less playoff victory with the Denver Broncos than does Peyton Williams Manning.  That’s were the legend was born for most non-football fans that follow his exploits like methed-out Grateful Dead fans – except instead of a dead-head-sticker on their Cadillac, they were their love around their necks.  We all have a friend or two, that adore this man like no other – someone who would sacrifice an entire Fantasy Footballdraft/season to give him a roster spot, just to say, they drafted Tim Tebow.  No denying, Tim moves the needle……(continue reading)

Source: …Let there be DiRT | The Dirt Canon Blog

Today, I wanted to take some time and provide you all with a breakdown of the last five games as it pertains to each position for your Daily NBA Fantasy games.  Each day I look to provide you with Absolute Must Haves, Notables and Sleepers. Within each of these categories I will look to provide you with players that you should consider taking in each night’s games, who will out perform their projection and how injuries will impact other players performance for that night.  In addition to this daily insight, I am going to provide you a weekly breakdown of players by position as it pertains to both Fan Duel and DraftKings.  So let’s take a look at the Overall Performances over the last 5 games for Fan Duel.  The overall, number one, player was Anthony Davis.  He comes in slightly higher than Westbrook but it should be noted that Davis did not play in all 5 games as such his average is based on last 3 games.  The notable players that I want to highlight for you are Brook Lopez and Eric Bledsoe.  Both of these players……(continue reading)

Within 30min yesterday, the day moved from rumor and innuendo to surrealistic glee.  It was like watching a live chicken being dropped in a snake pit.  So with emancipated joy NFL GM’s traded away talent, signed perishable goods and threw fanbases off their bandwagons.  The Chipster trading Nick Foles for Sam Bradford and further having fans asking “whats up with that?”  The thing for me about Chip is this, he’s gonna succeed or drown doing it his way and you have to admire that.  Chip is channeling his inner Sinatra and good for him, but it’s hard to have faith in his conviction that X’s and O’s are better than Jimmy’s and Joe’s – scheme is cool Chipster, but players win titles…...(continue reading)

You gotta feel for Shady McCoy being done DiRTy like that, being sent to football’s wasteland to play for Rex Ryan.  Overnight the Eagles traded Lesean McCoy and although we talked about that happening, we believed Chip was going to take a different player from Oregon – instead of moving up to take Mariota, he got Kiko Alonso.

So Buffalo gets a Pro Bowl RB in his 7th season – to a team that has no real QB – expected to be a work-horse in a system that he may not be designed to handle.  Shady is not a rex-ryan-run-heavy type of running back, and this now signals the end for CJ Spiller, and although he has to look for a job – Im sure he revels in getting out.

Going into the weekend, we had the NBA trade deadline that usually ends up being a shell game of bad contracts and stiffs.  No one would blame you if you looked away to make some late-afternoon nachos and and come back to Sportscenter to yell “what the hell just happened?” Indeed.  What did happen? It seems that Dragic was the fuse to the whole powder keg and the rest of the league got covered in guts.  From there it was a mad dash to the grocery store in a blizzard for some teams, forgoing the essentials and heading straight for the items that make you glad you have sweatpants.

If you needed anymore proof of how valuable Lebron James is, look no further than the Heat trade.  Without Lebron, Miami has been struggling and needed to do something to make the bottom rung of the eastern conference playoff tree – Getting Dragic makes the Heat a better team but barely more than the 7th seed in the East, and he leaves to be a free-agent at the end of they year.  Meanwhile, the Cavs are playing the best ‘ball’ in the NBA right now and they’re currently 2 games out from the 2nd seed.  When last season they could only manage 33 total wins and missed the ‘offs……(continue reading)