Based on feedback from you, we are giving you a bit more by expanding to all positions. In order to do so we wanted to provide you with some definition behind the data we are providing.

At The DiRT Canon, our matchups not only consider what the player’s opponent has given up to a position, we go all the way down to the depth chart position for that player and what that defense has given up to that position.  We also consider, this information for the current season and ever in the past along with incorporating home or away. We have then added our own personal flavor where we don’t bother providing you with players that aren’t going to play or are basically irrelevant so we have established a custom figure of projection for each position that we also filter by. What does this mean? It means that we aren’t going to tell you some third string guys whom have the lowest opponent value for the week but instead we are looking to display players that are expected to at least get you the minimum amount of points needed from that position in order to #Win.  Just click Weekly_Top5_wk14 for the full report. Like information like this, come and sign up today, we will be offering a 7 day trial, just click here.  Enter promo code WIN and start your FREE TRIAL today!

Not unlike last week, we don’t have a ton of top tiered players, playing bottom tiered defenses this week but DC*3PO does project a higher average score over last week. This week, DC*3PO has a projected minimum winning score on DraftKings to be 170.1 as of Friday morning and FanDuel to be 143.1. That said, there are some key players that I want to provide some insight and information for you as I look to kick start your lineups for this weekend. After that, use the detailed custom metric creation reports, such as Big Play Potential and Projection2Spend in order to build your lineup. Last, why not check our Lineup Analyzer™ and see if there are any players you should be considering. Just click here, and then you can pick from FanDuel or DraftKings thereafter. Please note, we have a FREE TRIAL, which is a 7 day trial, that cost you nothing. Enter promo code WIN for additional savings on your full membership.

Kick start your lineup for this weekend and use our Big Play Potential custom metric in order to determine who is most likely to have a play over 50 yards. In reviewing our top 5 and our Big Play Potential, you should consider Big Ben again with a 67.5% chance of a Big Play and Martavis Bryant with a 30% chance of a Big Play and the #10 ranked WR coming into this week. Some other key notables would be C.J. Anderson at a 16.4% of a Big Play. Last we have Amari Cooper and Travis Benjamin both at the WR position this week and a 31.1% chance of a big play for Cooper, these guys should make your list in some capacity. Finding a way to get all of these guys in one lineup could be a challenge, here are some other players that should see significant increase in workload this weekend with top matchups this week.  1st we have LeSean McCoy for Buffalo with a salary of $6,100 on DraftKings. McCoy is averaging 17 FPPG and should be extra motivated to put it in the end zone against the Eagles who are ranked 21st against the RB1 position this season. At the WR position, a high risk, high reward guy to consider could be Vincent Jackson for the Buccaneers with a salary of $4,500. V-Jax should see plenty of targets in this game against the Saints.  Last you get your $2,700 TE of Austin Seferian-jenkins. The Saints are #32 with pass plays against TE and had 6 targets in his first game back.

Don’t Forget to sign the petition for daily fantasy 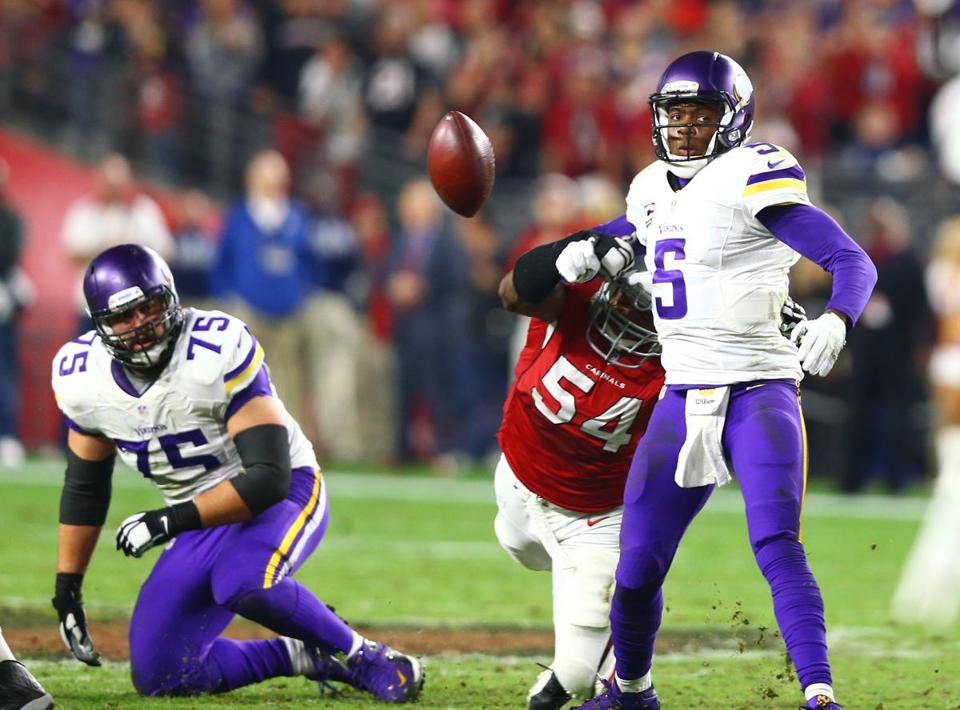 Dwight Freeney joined the Cardinals a month into the season and saved himself for most of the game, to give us all an example of what he used to could – and it was magnificent.  Forget the discussions about the play-call, or the decision to eschew the field goal, or the fact the Vikes actually had a chance to tie the game – a game they had little chance to compete in the first place, with injuries and limitations – be impressed on how they stood toe-to-toe with the now NFC West Champs.  The problem now for the Vikes is it seems the wheels are falling off and may not make the playoffs.

Adrian Peterson’s first-quarter touchdown on Thursday was the 100th of his career and 95th of the rushing variety. Peterson, who has played in 117 regular-season games, is the 23rd player in NFL history to reach 100 career touchdowns. Of the first 22 players to do so, only eight reached that mark in 120 or fewer games. LaDainian Tomlinson was the quickest to reach 100 touchdowns, doing so in his 89th game in November 2006 (in a matchup with the Broncos in which he scored four touchdowns, three on rushes).

After rushing for 69 yards on Thursday, Peterson has 11,441 career rushing yards in the NFL. Only three other players in NFL history reached 100 total touchdowns and 10,000 rushing yards within their first 120 career games: Jim Brown (reached both of those marks in his 98th game), Emmitt Smith (106th game), and Tomlinson (106th game).

Brown with another big gain

John Brown had a 65-yard touchdown reception on a pass from Carson Palmer to give the Cardinals an early 10-7 lead over the Vikings on Thursday. If that seems familiar, that’s because Palmer connected with Brown on a 68-yard pass this past Sunday in their 27-3 victory over the Rams. Over the last five seasons (since 2011), only three other players had a reception of at least 65 yards in consecutive games: Pierre Garcon of the Colts (Weeks 4 and 5 of 2011 season), the Giants’Victor Cruz (Weeks 16 and 17 in 2011), and the Browns’ Josh Gordon (Weeks 13 and 14 in 2013). The last player to do so for the Cardinals was Hall-of-Famer Jackie Smith late in the 1967 season. Smith finished that season with 1205 receiving yards, ranking third in that category.

Brown has three receptions for 65 or more yards in his two seasons in the NFL. Since the start of the 2014 season, only two players have more receptions of this length: Odell Beckham and Martavis Bryant, each with four.

Carson Palmer tossed two touchdown passes in the Cardinals’ 23-20 victory over the Vikings, giving him 31 passing TD’s on the season and overtaking Kurt Warner (30 in 2008) for the most in a season in the Cardinals’ 95-year history. Palmer did not throw any interceptions in Thursday’s game, marking the fifth time this season that he had a game with at least two touchdown passes and no interceptions. OnlyTom Brady (seven), Aaron Rodgers (six), and Andy Dalton (six) have more games of this type in the current season. That ties the most such games for Palmer in one season in his career, having also had five in 2005. (h/t Elias Sports Bureau)

2. ‘Cause Knowing Is Half The Battle

The NFC East is a raging dumpster fire as each team has a losing record. The Cowboy, Eagles, Giants and Redskins are a combined 10-20 straight-up outside the division and 11-18-1 against-the-spread. All four teams play non-division opponents in Week 14.

Carolina has become the sixth team in the last ten years to start the season 12-0. The other five squads all won their next game and went 4-1 against-the-spread.

Cleveland is in the driver’s seat for the No. 1 overall pick in next year’s draft after losing seven games in a row. All-time, teams with that long of a losing streak have covered the spread in the next game 57% of the time (64-48-2).