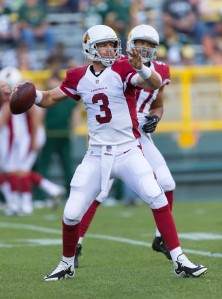 Arizona tops this list for the first time and they really should considering the fact that they blew out the 49ers by 28 points in week 2 and had two pick 6’s in the first quarter of that game. This week, they get to play Gabbert and I do suspect that Arizona will put a beat down on them again this week. The player that most will have is Carson Palmer and while he is a good play, here at The DiRT Canon, we look to provide you special insight that not every other site is going to give you. The pick of the week in that game is going to be Chris Johnson. He will get over 100 yards in this game and have at least one touchdown. Keep in mind that tiny Rawls had over 200 yards last week against the 49ers and 2 TD’s and if you took him, you won in all of your contests last week as he would have represented over 34% of the needed score to win and you would have only needed to average 8.6 points per player for the rest of your squad. As for the Bengals contest, that seems to be more of a crap shoot than anyone on New England over the past several weeks. Their top fantasy performer hasn’t been the same person for two consecutive weeks all season long. Where can the exploit the Rams, it’s in the passing game so I suggest AJ Green gets the targets in this contest and he will definitely be selected by less than 10% of the field. Last we have the Packers and Bears old rival game later today! Aaron R-E-L-A-X Rodgers should have a solid performance again this week and it will be Randall Cobb day again in Lambeau. 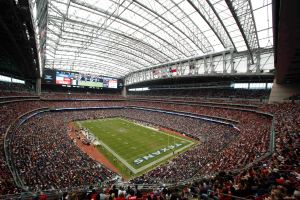 The highest projected matchup for this week according to Vegas is Houston and New Orleans at 47.5. This marks the first time all season that we don’t have a matchup expected to go over 50 points. All that means to me is that it must be almost December. The cold is beginning to set in and those TD’s aren’t going to come as easy down the stretch. Here is the thing about this matchup, we don’t know if Hoyer is going to play just yet but he is expected to start. If he plays, he will throw for 4 TD’s and 0 Int’s just like everyone else that plays the Saints these days. He is going to be selected by over 30% of the field this week because of this trend and that means that Hopkins will also be selected by most of the field. While solid choices, if you want to go against the norm here and are looking for a solid play for both teams, here you go. DC*3PO shows Nate Washington as having a big game this week 17.6% chance of him having a 50 yard play or more this week. On the Saints side of the ball we have Mark Ingram with a 16.0% chance of having a 50 yard run play or more this week. I like Brees and most won’t have him either, as the Texans defense has begun to play ball these past three weeks but it’s not the matchup he had against the Giants.

So who should you take based off this information, let’s breakdown the numbers. It appears that Washington and the Giants are going to have a big scoring game and really they should. Neither defense can really stop anyone these days. If Reed plays, he should be your starting TE for this weekend, if he doesn’t go with Barnidge. On the Giants side of the ball, I would like to say that Jennings is going to get the bulk of the carries and he is projected to be the best but the guy in the backfield in this game is going to be Vereen. He will get you a 20+ fantasy performance this weekend and almost no one will have him. Either QB is a good pick this week as they should both put up big numbers as they will both throw the ball over 45 times each in this game.

Check back on Sunday morning as I will reveal our expert picks for this weekends games!

Since today is Thanksgiving, The DiRT Canon, wanted to give you a kick start to the weekend and we will reveal our top fantasy lineups for the special Thanksgiving contests today. Have lots of food, enjoy your family and friends and bring in some cash as you get ready for black Friday. Don’t forget to start your FREE TRIAL today just click here and use promo code WIN for a special discount. 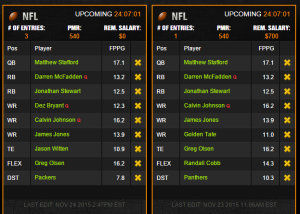