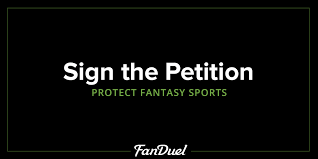 Every year 50 million Americans play fantasy sports. I am one of them. For millions of Americans like me, fantasy sports has become an important way of life. It’s about the community, the competition, and the love of the game. Ask anyone who plays and they’ll tell you the same thing: they do this because they love it. I personally oppose any measure that would move to take away that experience by restricting paid fantasy sports. And to anyone looking to end this game I say: Let us play!

Go to FantasySportsForAll.com. I encourage you to go there now:

Here is what we are asking you to do to support our industry:

Again, the FantasySportsTradeAssociation’s initiatives will only be as successful as the support you provide. The entire industry is depending on your efforts to get the word out.

In this pivotal moment, please help give us all a voice to make sure that fantasy sports remain for all.

How You Can Help

EXAMPLE FACEBOOK POSTS
Add your name to protect fantasy sports across the country—sign this petition to protect #FantasyForAll today: http://bit.ly/1knd15t

Across the country, the fantasy community is teaming up to protect the game we love. Add your name to protect #FantasyForAll today: http://bit.ly/1knd15t

EXAMPLE TWEETS
Say you’re on our team—add your name to this #FantasyForAll petition to protect fantasy sports today: http://bit.ly/1knd15t

Retweet to spread the word—add your name to this #FantasyForAll petition to protect fantasy sports now: http://bit.ly/1knd15t

Join us in protecting #FantasyForAll—sign this petition today to say you stand with the fantasy community: http://bit.ly/1knd15t

DraftKings and FanDuel were ordered to stop accepting bets in New York as the attorney general said their games constituted illegal gambling under state law.

One month after launching an investigation into daily fantasy sports behemoths FanDuel and DraftKings, New York Attorney General Eric Schneiderman has now ordered the industry leaders to cease operations in the Empire State.

Daily fantasy sports regulatory bills have been introduced in several states. Which ones are likely to be next to consider a DFS bill?

TRENTON, N.J. (AP) — Making a case they hope will resonate with states across the nation, representatives of the fantasy sports industry told New Jersey lawmakers Monday that regulators should not treat them the same way as casinos because success in their industry relies more on skill than on chance.

Their testimony to an Assembly committee was clearly aimed beyond the confines of the state: New Jersey’s gambling regulations are considered the strictest in the nation, and a favorable determination could clear the way for daily fantasy sports in much of the rest of the country as regulators look to New Jersey for guidance……(continue reading)

5. Did You Pinball Was Illegal in NYC For Over 30yrs?

It’s kind of unbelievable to think about it now, but it’s true: America went through a period between 1940s and the 1970s when pinball was banned in many of its biggest cities.

Source: Did You Know Pinball Was Illegal In NYC For Over 30 Years?: Gothamist

New York Gov. Andrew Cuomo got the full treatment on Thursday night’s “Daily Show,” and not the kind reserved for a beloved celeb or a guest pushing a…

Cuomo Under Fire For Meddling In Anti-Corruption Panel He Created

By Nate Raymond NEW YORK, Jan 13 (Reuters) – A New York state assemblyman was found guilty on Monday on charges he accepted $22,000 in…

We Knew New York Was Corrupt, But We Didn’t Know It Was This Bad

WASHINGTON — In a sweeping indictment of New York politics, a commission empaneled by Gov. Andrew Cuomo (D) to investigate official corruption in the…

Yet Another Moreland Commission Targeting New York Corruption: Déjà Vu All Over Again?

Is the creation of a Moreland Commission the nuclear option Cuomo has claimed it to be, or is the current Commission nothing more than an illusion designed to give the appearance of taking decisive action to attack corruption?