Posted on November 8, 2015 by Logan Cartwright sports Aside 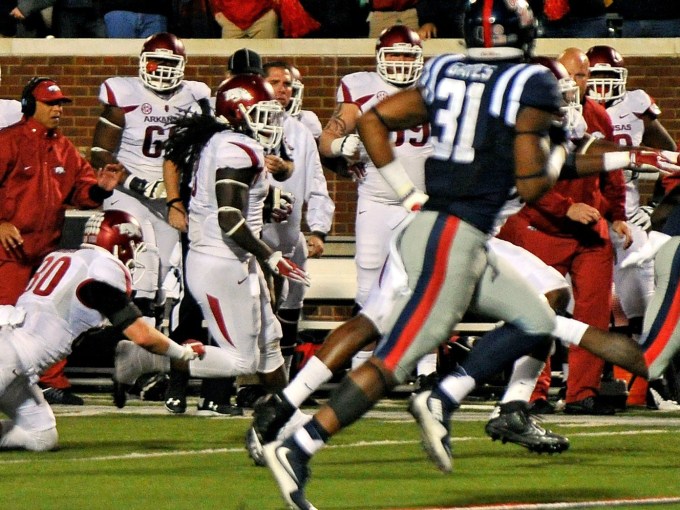 Are you still riding the excitement from Saturday’s college football games? (After that crazy Arkansas 4th-and-25 lateral, how could you not be?) If so, then you probably can’t bear to wait until Tuesday to see how the College Football Playoff committee will rejigger its rankings. So FiveThirtyEight has got you covered. On Sunday, after each week’s games, we will cook up some fresh predictions from our model. (These numbers will change again on Tuesday night after the new committee rankings are released.) Here’s a breakdown of how this week’s games affected the model:

The Tide rolled over No. 2 LSU on Saturday night, 30 to 16, giving them the best Elo rating and a top-four mark, according to the Football Power Index. Our model now says No. 4 Alabama’s chances of making the playoff rose from 41 percent to 54 percent, while LSU’s odds fell from 30 percent to 19 percent.

TCU suffered the biggest blow to its playoff hopes, falling from 31 percent to 10 percent, after the Horned Frogs were walloped by Oklahoma State, which moved up to 16 percent.

No. 1 Clemson, after grinding out a 23-13 win over Florida State, surpassed Ohio State with the best odds to make the playoff: 61 percent. Clemson and Ohio State are now tied as the best bets to win the national title. The Nebraska Cornhuskers, with four wins and six losses, are nowhere to be found on this table, but their effect sure is: after they upset Michigan State, 39-38, the Spartans’ playoff chances fell from 22 percent to 10 percent. 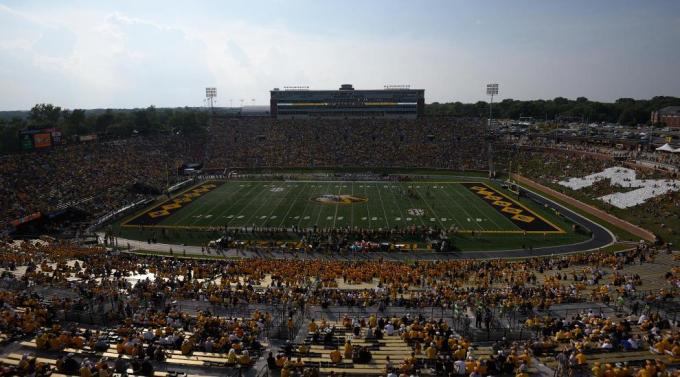 In response to ongoing racial unrest on campus, Missouri’s black players say they will not participate in any football activities until university president Tim Wolfe resigns or is removed from his position.

Source: Missouri players sit out in protest amid racial unrest. 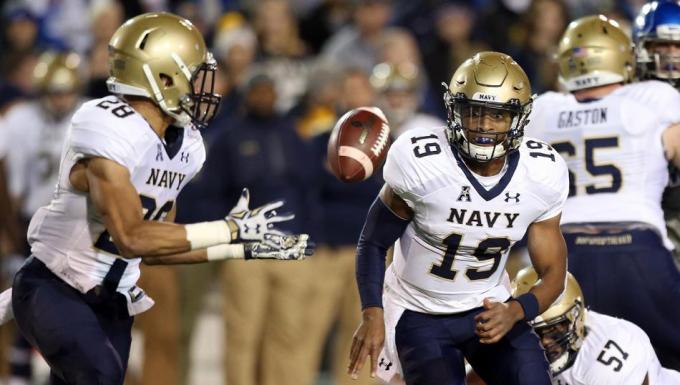 Memphis’ undefeated dream is over, as the No. 13 Tigers were trampled by Navy’s option attack 45-20 on Saturday night in Liberty Bowl Memorial Stadium. With the win, Navy has inserted itself into the mix for a New Year’s Six bowl game.

Source: Navy rolled past Memphis to give the Tigers their first loss. 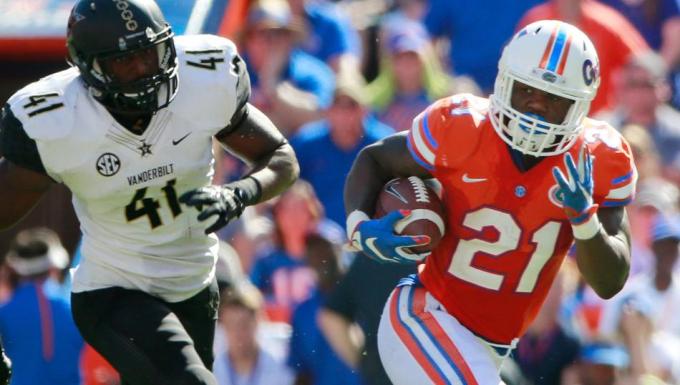 Florida seemed to be underrated when the selection committee ranked it No. 10 in its first College Football Playoff top 25, but maybe the committee was on to something, as the Gators just barely escaped with a 9-7 win over Vanderbilt on Saturday. 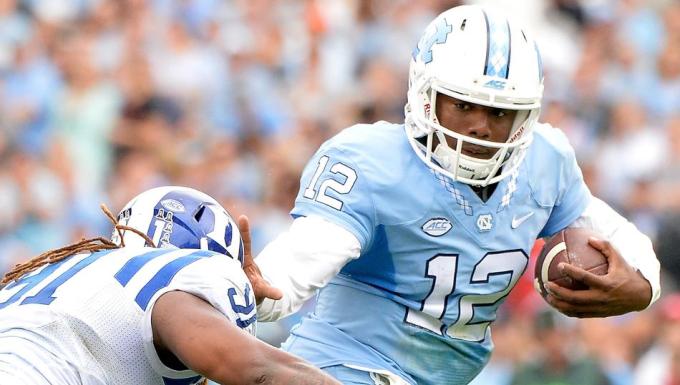 North Carolina was the only one-loss Power Five team not in the selection committee’s first top 25, but that’s going to change. The Tar Heels dominated rival Duke 66-31, taking control of the ACC Coastal with an onslaught of big plays. 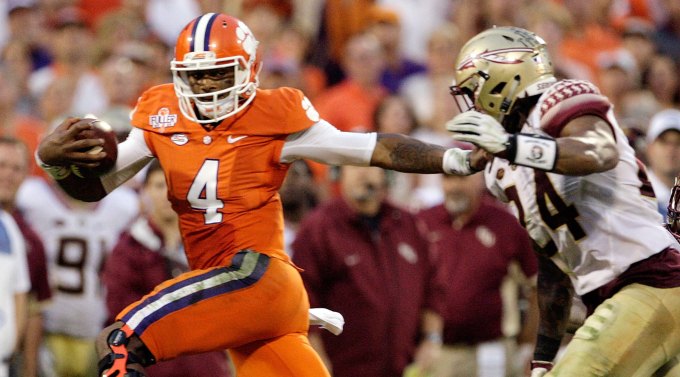 Deshaun Watson and a stifling defensive effort powered top-ranked Clemson to a 23-13 win over No. 16 Florida State on Saturday in Death Valley. With the win, Clemson booked its first appearance in the ACC Championship Game since 2011. 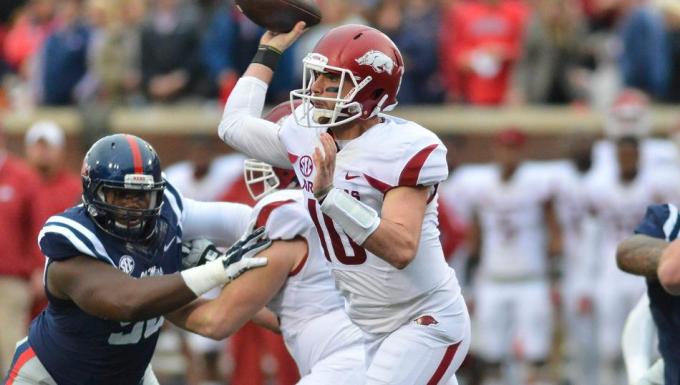 Arkansas won an overtime thriller 53-52 at No. 18 Ole Miss, pulling off yet another of the most improbable plays you will ever see in a season full of them, with a miracle fourth-and-25 conversion followed by a TD and two-pointer for the victory. 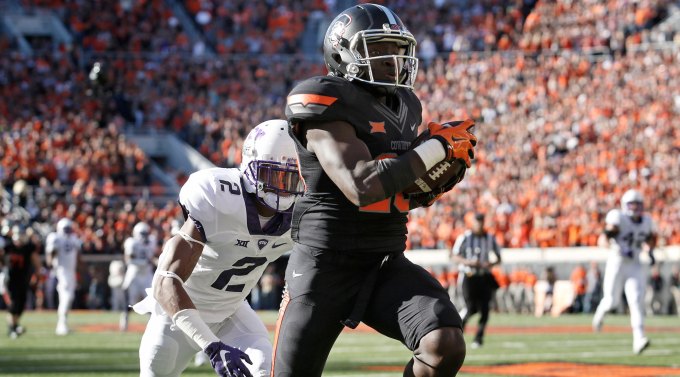 Oklahoma State spent Saturday bolstering its playoff resume with a dominant win over TCU. The No. 14 Cowboys won 49-29, staying undefeated and ruining TCU’s perfect season behind Mason Rudolph and a big-play offense.

Source: Oklahoma State takes down TCU in battle of unbeatens.

Today we have two potential games with some weather to deal with, both of which will entertain teams from the NFC South division. Today we have light rain in the forecast for both Tampa Bay vs. Giants and Falcons vs 49ers. How does this impact you fantasy selections? Let’s take a peak at this from the historic perspective. The Bucs haven’t won a game with rain in over 5 season, however, they have thrown for over 300 yards approximately 36.7%. I still like Winston as a #Sleeper QB for today. Moving onto the Falcons contest, we have some light rain in the forecast there as well. I don’t think that changes the game plan for the DiRTy Birds as they will most likely let Freeman lose. I like Freeman even more considering this impact with a projection of over 20 on DraftKings, he is a #MustHave this week. For more information just come here.

Now for the part that we know you have all been waiting for, give me the lineup that will win. I know, I know, we have done this quite significantly in the past and now we have our lineup analyzer providing automatic lineup recommendations but what do I think. Here is my top 3 lineup for week 9, main contest on Draftkings:

Now we look to provide your FanDuel lineups for the week below: 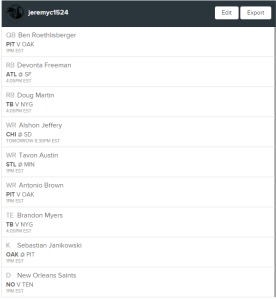 In this section, we look to provide you with a breakdown of who the public is taking this week. Since this information is not readily available we are using the perfect challenge from nfl.com. 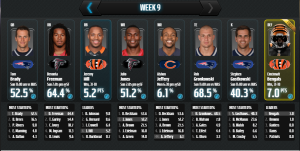 Some personal thoughts on players to consider today would be #1 Sleeper Stevie Johnson for the Chargers. Considering that Allen was at 12 targets per game, they have to go somewhere and why not to a slot guy. He’s only $3,200 on DraftKings so he is certainly a high consideration. #2 I have Brandon Myers for Tampa Bay. The Giants get killed by the TE each and every week and with Jenkins most likely to sit out this contest i.e. not official just yet, look for Myers to come in and have a big role today. Our top QB in terms of big play potential is Big Ben at 68% chance of throwing a pass of over 50 yards today. That means the Big Ben and Antonio Brown combo breaker is a very good candidate for today as well.

Come check out the rest NOW. 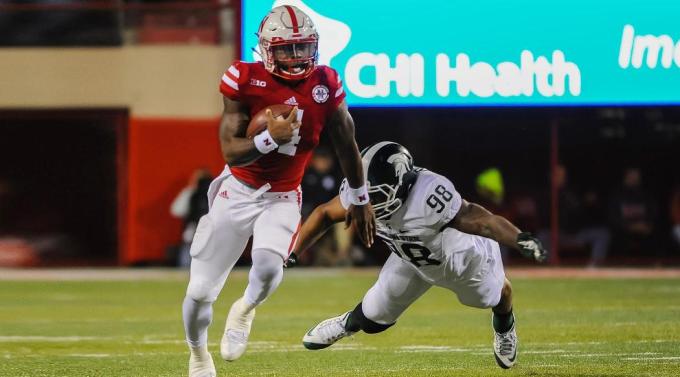 Nebraska ended No. 7 Michigan State’s undefeated season on Saturday, with a dramatic 91-yard drive in the last minute, capped by a controversial 30-yard touchdown catch by Brandon Reilly after he stepped out of bounds.