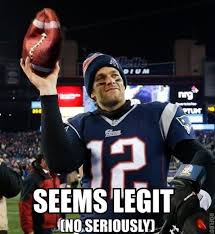 As we look to move into the second quarter of the NFL season, we have some certainties, one of which is Tom Brady!

He has started off the season as the highest producing player on FanDuel and #3 on Draftkings. This week he is our #1 overall Absolute #MustHave! This is the game we have been waiting for since the Colts called shenanegans on the Pats last post season. Not only have the Patriots owned them of late, they have blown them off the planet. This game doesn’t seem to have any more to it than that but I will say that by enlarge the Patriots have beat the Colts down by running the ball with an extra lineman into block. Look for Brady to exceed his projection of 26.12 on Draftkings this week as they have different weapons this year and I suspect that Lewis, Gronk and Edelman will all get into the mix, not just Blount! I believe that Gronk get’s back on the TD train, Patriots roll the Colts by 29, just like they have averaged since Andrew Luck came into the league.

For FanDuel our top Notable for week 6 is Ryan Fitzpatrick, coming in with a projection of 17.77 and a positive projection to spend ratio of 2.24.  He is coming off a bye week last week and the Washington secondary is not very good.

Look for Brandon Marshall to also have another solid performance again this week. On Draftkings, we have Andy Dalton. What can I say about his play this season, simply amazing.  I have started him on one lineup every week since week 2 and he has outperformed our projection each time this season. The Bills defense is supposed to be stout but did you know that they have given up at least 22 fantasy points to every QB this season except Mariota last week.  He was close but look who Tennessee has, certainly no AJ Green over there, look for Dalton to continue his top 5 play again this week and put up 25 fantasy points.  On Draftkings as his salary is far lower than his production so far this season so give him a shot, you won’t be disappointed. His Draftkings Projection is 20.85.

Now for the category that most, if not all of you are really looking for.  Each week we have nailed our #Sleeper for the week and that is why we have been so consistent in winning on both FanDuel and Draftkings!  Drum roll please………….Ryan Fitzpatrick is our Absolute Sleeper on Draftkings this week.

He comes in with a Draftkings Projection of 16.58 and a salary of only $5,000. I know that you might be looking for a different position here but our Absolutes are based off of a combination of projection and matchup value for the week.  While Washington has a descent statistical value this season, the value for Fitzpatrick is there.  If you took McCown last week, who was in a similar situation, you blew it up last week and Fitzpatrick is that guys this week, trust me.  Our FanDuel Absolute Sleeper is C.Santos for the Chiefs.  Yeah, I know a Kicker, come on MAN! The truth is, the Cheifs are going to struggle to put the ball in the end zone with Charles gone for the season, look for big points out of this young man.  My personally selection for this week’s #Sleeper is Antonio Andrews of the Tennessee Titans.  Andrews is averaging 13.8 fantasy points per game on Draftkings this season and Miami comes in with the highest projected rush yards against for the week.  He is only $3,400 so for that price, you can afford some higher priced folks this week.

Get your full FanDuel Absolutes report for week 5 here.