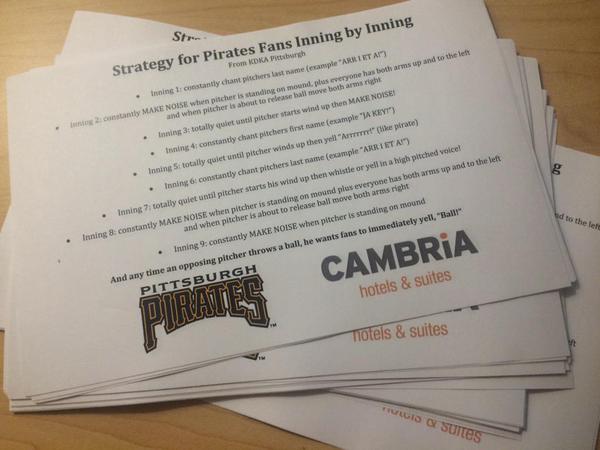 This is Pittsburgh’s Bartman.  Maybe one of the most complete teams the Pirates have ever had and some douche-nozzle comes up with THIS, AND gets a Hotel chain to produce them to pass out.  Hey, it’s #Murica and we all have that luxury – but just because we can, doesn’t mean we should and #5 is the example hillbilly fandom that screams #KarmicResponsibility.  Beyond the Nuclear-Level of OCD this fan has – he must have forgotten you never plan cheers – you’re not Duke fan and it’s never clever.  I say HE because we all know, only a man would come up with this from his mother’s basement.

Anyway, now the Cubs move on to face a team in the Cardinals that seem to be held together by duct-tape – aren’t they every year? – so now we get two fanbases, that dislike each other, to such a degree, that they both act like everyone’s drunk uncle, on Thanksgiving, at your Mom’s house, with her new boyfriend that looks a lot like Jim Tomsula…Cubs fans are excited, again.  Like a dog chasing cars – it seems like the dopamine dump, cubs fan gets, shuts off their common sense and they quickly forget/bury the destiny that they are to blow it in the worst way.  All we need now, is some clown to get a world series tattoo and complete the affront to #KarmicResponsibility – or some other nonsense that creates the cyclical train-wreck of sorrow Cubs Fan is so used to.

Those plucky Rangers are back in the playoffs, and it seems they only get there when they have Josh Hamilton, and Cole Hamels – eeery.  To start the season, the 2015 Rangers found themselves without young phenom Profar and staff Ace, Yu Darvish – and further seemed out of it by the trade-deadline.  Then they traded prospects for Cole Hamels, strengthened their bullpen, got healthy and went on a second-half tear to win the division from the Astros.

For the BlueJays, you have to remember 2012, when they finished with a 73-89 record and by trades and free agent signings they brought in Jose Reyes, Mark Buehrle and R.A. Dickey only to improve by one game.  In 2014, the BlueJays improved to 83-79, so when they were looking at a record of 45-46 at the All-Star break, the ‘Jays pushed all the chips in on Tulowitzki and David Price, to go along with 2015 free-agent signee and possible AL MVP josh Donaldson, to become an offensive juggernaut that can play D and pitch.

No-longer are they the Lastros – an organization that averaged 108 losses from 2011 to 2013 and are baseball’s youngest team – they beat the Yankees on Tuesday and now face their opposite in every way.  It’s Manufacturing versus Big Oil.  The steady-rolling production of the Royals, versus the Boom-or-Bust-strike-it-rich nature of the Astros.

If any fanbase can understand and appreciate what Gamecock fan is going thru – its Tiger fan.  What comes to mind for me is 2005 when LSU had to go to Arizona State after Hurricane Katrina for a home game in the desert.  Arizona State donated the gate receipts from the game to LSU and the Fiesta Bowl covered LSU’s travel expenses – in return, LSU will pay it forward to South Carolina, and what could have been a trap game looks a bit more fortuitous for LSU – so Saturday I’ll cheer for South Carolina before and directly after the game.

Last night was the start of the NHL season if you were to busy to notice watching the Pirates and Cubs.  In Chicago they raised another banner and the Rangers started the Blackhawks off with a L.  If you do not have NHL-CenterIce package to watch all the ‘Ockey you want – I think you can find games on the NBCSN channel – I just have no idea where to find it…but anyway here is Yahoo Sports preview of all 30 teams from the Puck Daddy staff: