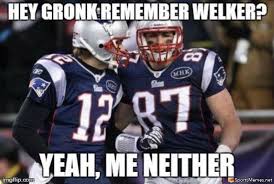 As we look to move into the second quarter of the NFL season, we have some certainties, one of which is Tom Brady!

He has started off the season as the highest producing player on FanDuel and #3 on Draftkings.  This week as he is our #1 overall Absolute #MustHave! Tom gets to exploit the Cowboys defense this weekend, where the Cowboys have McClain and Greg Hardy coming back. Seeing that Greg Hardy still seems to think that we don’t know how awful and disgusting his actions were in Carolina, he seemingly felt the need to make derogatory comments about Brady’s lovely wife and his expectations of her friends, read more here. This just cemented my pick for my daily fantasy QB on Draftkings and FanDuel this week. Look for Brady to exceed his projection of 26.12 on Draftkings this week. The extra week to prepare should mean that Gronk get’s back on the TD train, Patriots roll the Cowboys by at least 3 touchdowns.

For FanDuel our top Notable for week 5 is Blake Bortles.  He is coming off a strong performance and gets to face the lowly Bucs this weekend.

Coming in with a FanDuel Projection of 17.01, he might be a good cheap play at QB this week.  On Draftkings, we have Larry Fitzgerald. What can I say about his resurgence this season.  I took him in Week 2, more so because he was the best player left in that specific salary range and all he did was blow up.  He has been MR. Consistent since that time and should be considered in all lineups on Draftkings as his salary is far lower than his production so far this season.  Look for him to have another solid week with 8 catches for 133 and 1 touchdown against the Lions.  His Draftkings Projection is 23.68.

Now for the category that most, if not all of you are really looking for.  Each week we have nailed our #Sleeper for the week and that is why we have been so consistent in winning on both FanDuel and Draftkings!  Drum roll please………….Dion Lewis is our Absolute Sleeper on Draftkings this week.  He comes in with a Draftkings Projection of 15.53 and a salary of only $4,800.  Dallas cannot stop anyone and NO, I don’t think Hardy does anything to change that this week.

Lewis is going to get 6 catches per game and as long as he gets 40 yards and a touchdown, this is a great pick.  Our FanDuel Absolute Sleeper is Gostkowski for the Patriots.  As you can see our DiRT Canon AI DC*3PO is all over a huge New England victory this week and so am I.  My personally selection for this week’s #Sleeper is Chris Thompson with Washington.  The Falcons are giving up the most fantasy points to running backs so far this season and Thompson looks to get added playing time with Matt Jones on the sideline and a trust issue with Alfred Morris.  This is very high risk so let’s see if we get high reward.

Get your full FanDuel Absolutes report for week 5 here.