The Associated Press is a joke, and has always operated as one.  Remember back in 2003 when they handed out a paper-weight to USC because of their pompous piety to standards/tradition and what not – eschewing the BCS notion of who was truly the #1 team – endorsing a lack of institutional control in Compton.  So, now that history has been written and the crystal football still resides where it has always been – we get the current AP poll.

Yes, history has been made with 10 SEC teams in the top 25 – sure, last week the SEC went 12-1 – (sorry Vanderbilt, you’re supposed to be SEC) – and so of course with one week of football being played we see Alabama moves up to #2, Notre Dame moves up to #9 — polls are stupid and should not be published until after week 5 – they are as outdated as the newspapers they are used to sell more of – can’t wait until after this week and the chaos it will cause – Mich.St v Oregon, LSU v MissSt, Oklahoma v Tennessee, USC v Idaho, etc….

On Monday night,this week,  this was on NBC, and all I could think about is how – how is this happening and why did anyone let Drew this?  All the what If’s aside, Has Drew not done enough? Mardi Gras King, Superbowl Champion, to crocodile wrestler?  He also jumped out of a helicopter – Crikey!  If you listen closely you can hear the theme of Indiana Jones in the background – Drew even got a tooth for good luck.

Yes, in real life Ronda Rousey is a badass – and yes she can be easy on the eyes – but why is Hollywood trashing the memory of Patrick Swayze?!  First, they remake Point Break – reread my thoughts about that here: and now they are re-making Roadhouse?!

Why is Hollywood continuing to redux movies that do not need updating?  There are only a handful of remakes that ever turned out decent, and that is because no one saw the original, or it was so outdated/long-ago that no one is sane, or alive enough to care anymore.   Remakes should only be like Ocean’s 11, The Fly, The Thing or Invasion of the Body Snatchers – movies remade from the 50’s.  Don’t want to be rude – be nice – ok, it has possibility, but I’m betting it will be a Double Deuce – two things!

This is last night’s perfect lineup and we had several targeted for lineups that ca$hed, on this list.  Keep up to date with us for your baseball needs on Tuesday and Friday nights – you can also use the information for the games in between those days using our WAVE number.

Word is, Americans will bet, mostly-illegally, $95 billion dollars on professional and college football this year – so says the global gaming research firm – Global Compliance…who knew one of those existed.  But that amount would be the largest in the world and is more revenue than the NFL.  So think if it was legal – Global Compliance says that would mean $12.4 billion in estimated annual revenue.  I am not gonna pretend I know enough of the logistics or how to make that happen, but it is mind-boggling.

I’ll stick with giving advice like I did last weekend that gave my attorney an extra $600+ because I told him to take Temple – he did, he won.  Now Penn State has literally buried their game-footage and we still started off the season being 90% accurate straight up and 76% ATS – thats picking up where we left off, eh?! 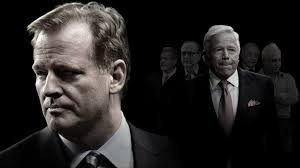 ESPN unleashes a report that ties all the Patriots have done into a nice little package, from SpyGate to DeflateGate – and the digital-ether explodes!  Really, how is this all still news – we knew this already – we have discussed it at length in this space, and not just the Patriots but all the cheaters – where is all this outrage coming from?

Roger Goodell going on Mike and Mike and then the Lebatard Show – tells me this all on purpose by the NFL.  Hizzoner couldn’t get a judge to uphold his suspension of Brady, so they help give birth to a smear campaign, littered with innuendo and rumor.  Where are all the facts and proof of SpyGate and all that stuff – OHHH that’s right, Hizzoner DESTROYED all that information – hmmmmmm….

It didn’t stop Bill Simmons from going off on twitter yesterday tho:

Finished OTL piece. Agree w/ theory that Goodell’s DeflateGate botching was a crazed overreaction to his bizarre Spygate performance. But…

Not sure what to make of the sour grapes stuff. Sure seems like everyone who ever lost to 2001-07 Pats now has a built-in excuse for failure

I’m just happy the 2001 Steelers can blame stolen signals for losing and not their special teams breakdown or Kordell shitting the bed.

And I’m happy for Rams – who scored a TD on their only SB36 red zone appearance but can now blame the Pats for stealing red zone signals.

And I’m happy for the Eagles – who fell apart down stretch in SB39 like they did in 20 other McNabb/Reid games but now have a good excuse.

And I’m happy for the Colts – who kept blowing big games to NE until Polian got the NFL to change the passing rules, but now have an excuse.

And I’m happy for Carolina – went 14-18 in the seasons before & after SB38, heavy underdogs in 03 playoffs, but somehow robbed of a title.