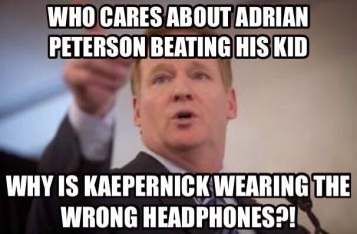 Yesterday, Adrian Peterson had a question for us on Twitter – he asked if “a contract is two-sided or one?”.  Before I could answer him, he went on an epic rant – clearly he had too many Pina Coladas and I thought it might be better for him to sleep it off and wait until the morning.

I love people who think they know it all! Smh, Research how many NFL teams hasn’t honored a player’s contract & learn something.

Question for the people, is a contract two sided or one?

Someone answer him so he can continue.

Ok great two sided! Well why when one party decides … Mr. ? we wan’t you to take a pay cut now or better yet flat out release you!

There’s never no talk about honoring a contract!

I know hundreds of player’s that wished their team would’ve HONORED the contract! But instead got threw to the side like like trash.

A lill crazy how one side has so much power that they can do as they please when it come to the contract! But when the other-side (player’s)

Feels for whatever reason! Family, Change of scenery or simply – what they feels just might work best for them! Those same laws don’t apply!

It’s all about honoring you’re contract! Sounds like free will is being a lil challenged to me!

All I’m saying as a Minnesota Viking player! WE need the same power to do as all 32 teams do we they feel, under contract or not!

It’s time for a change! Then again I’m grateful because at the end of the day, I know some of those same guys that wish a team held on!

Yo, Adrian! Remember that time last year when you still got paid $11.75m for beating your kid and played one game?!  Do you remember that your contract says you get $12.75m this year, $5m more than any other RB in the NFL?!  It seems more like you are arguing that YOU should not have to honor your contract?  While I agree with him in principle, He’s still an asshole – but if you want something different, then help change the collective bargaining agreement your Union agreed to!  Currently, a NFL team gives a player a contract and then can decide later, for a variety of reasons, if they want to cut him – it’s the ol’Switch-A-Roo (see what I did there? Sick burn, I know) – My point is this: NFL contracts are contracts, but they’re not guaranteed, (they do have guaranteed money) and there are certain things the team can and cannot do with them, and you would know this if you read the contract. And the fact the team can whack you after one year of your supposed five-year deal, or franchise you, or cut you at a date that is most advantageous for them, but not for you has been agreed to in collective bargaining. NFL players were hell-bent on getting free agency back in the 90’s, and they got it, while giving up a whole bunch of other stuff – and they lost the last go-round of near-work stoppage because management always wins in football and always loses in baseball. Because there’s always another football player out there who will play, while nobody but Pedro Borbon would cross a baseball picket line.

Sure, it’s draconian. But the facts that baseball teams stay on the hook for guys who have long since declined below their level of compensation (yes, no one forces teams to sign players to stupid contracts) and the “expiring contract” is often as big an asset in the NBA as an actual player who can play, are also messed up.

So, let him retire, let him force his way out, there will still be some-team who wants a child-abusing running back on the north-side of his career with over 10,000 yards on the odometer, (we’re looking at you Jerr-uh).  But instead of trumpeting your own horn about contract inequities, Adrian – why are you not addressing the obvious blackball of Ray Rice?!  While I don’t think Ray Rice has the physical ability to be an NFL back at this point (he didn’t look very good two years ago), why is it Rice hasn’t gotten a tryout with anyone, when Ray McDonald was able to land a deal with the Bears – and we all know how that turned out.  Adrian pleaded out, Rice has been acquitted, and one is trying to get work and the other won’t because of his ego – if only he thought about any of his sons as much as he thinks of himself.

Eduardo Rodriguez may be here to stay – the 22-year-old lefty tallied seven strikeouts over 7.2 scoreless innings in his major-league debut, leading the Red Sox to a 5-1 victory over the Rangers. Rodriguez is the first Red Sox pitcher in 48 years to throw at least seven shutout innings while recording a win in his MLB debut. On April 14, 1967, Billy Rohr threw a complete-game one-hit shutout against the Yankees in his first major-league appearance. In fact, Rohr had a no-hitter intact with two outs in the ninth inning before Elston Howard’s single ended the rookie’s chance at history. Despite the auspicious start, Rohr recorded just two more wins in his major-league career.

Prior to Rodriguez on Thursday, 95 pitchers had made their major-league debut at Globe Life Park in Arlington since the stadium opened in 1994. Rodriguez is the second pitcher of that group to throw at least seven innings without surrendering a run. On August 16, 2000, Brian Sikorskistarted for Texas and blanked the Yankees for seven innings in his major-league debut. That would be the only ‘W’ that Sikorski would record as a starting pitcher – he earned three more wins pitching in relief in 2006, his final season in the majors.

Including Thursday’s 7-0 whitewashing of the Braves, the Giants have recorded eight shutouts in May, all of which have come at AT&T Park. San Francisco is the only NL team in the last 99 seasons (1917-2015) to tally at least eight shutouts at home in a calendar month. The Giants themselves were the last NL team to achieve that feat – in September 1916, the New York Giants won an incredible 27 games at the Polo Grounds, including 10 shutout victories. Both the 27 wins at home and 10 shutout victories at home are major-league records for any team in a month.

Shelby Miller, who took the hard-luck loss in San Francisco after allowing one run in seven innings, owns an earned run average of 1.48 after his first 10 starts with the Braves. That’s the second-lowest ERA through ten starts for any pitcher who joined the Braves since 1966, when the franchise relocated to Atlanta. Buzz Capra, who began the 1974 season in the bullpen for the Braves, moved into the starting rotation in mid-May and allowed just nine earned runs in 78? innings over his first 10 starts with the team, good for a 1.03 ERA.

Corey Kluber rang up another 13 strikeouts on Thursday against the Mariners, increasing his total to 50 K’s over his last four starts. Kluber is the first pitcher in Indians history to record at least 50 strikeouts over a span of four starts within a single season, though Bob Feller achieved that feat for Cleveland in a multi-season span of four starts (the Hall-of-Famer struck out 18 in his final start of 1938 and 32 over his first three starts of 1939). The last pitcher in the majors before Kluber with at least 50 K’s over a span of four starts was Randy Johnson, who punched out 54 batters over four games in August 2004.

Chris Sale racked up 12 K’s over 7.2 scoreless innings, helping the White Sox win the opener of their doubleheader with the Orioles. The lanky lefty has reached double-digits in K’s in 21 of his 94 starts in the majors, making him the fourth left-handed pitcher that has debuted in the modern era (since 1900) and has struck out 10 or more batters at least 20 times within his first 100 career starts. The other three southpaws to accomplish that feat are Sam McDowell (28 times, 1961-66 Indians), Herb Score (26 times, 1955-59 Indians), and Johan Santana (21 times, 2000-05 Twins).

Adam Eaton hit a leadoff homer to start the second game of the doubleheader for the White Sox, but the Orioles responded with two runs of their own in the bottom of the first to take the lead, helping Baltimore earn a split against Chicago on Thursday. The Orioles are now 10-0 this season when they hold a lead at the end of the first inning. The only other team that is undefeated in that scenario this season is the Cardinals, who are 14-0 when outscoring their opponents in the opening frame.

After starting his night with four shutout innings, CC Sabathia allowed five runs over the next three frames, squandering the Yankees’ 3-0 lead in the A’s 5-4 victory. Since joining the Yankees in 2009, CC Sabathia is now 70-2 in 81 starts in which he was staked to a lead of at least three runs. Sabathia’s only loss in that scenario prior to Thursday was on June 28, 2013 against the Orioles – he allowed four runs in that start after the Yankees took a 3-0 lead.

New-Angel in the outfield scores twice in blowout

Nine Angels players scored at least one run in their 12-2 romp over the Tigers. The flock of run-scoring Angels included Kirk Nieuwenhuis, who scored two runs in his debut for Los Angeles despite no official at-bats in the game. The former Mets outfielder scored a run in the sixth inning after pinch-running for Matt Joyce, then he scored another on Chris Iannetta‘s grand slam in the seventh after drawing a walk. Only two players before Nieuwenhuis scored multiple runs in their Angels debut without recording a hit – Joe Lahoud (April 1974) and Jack Howell (May 1985). Both players scored exactly two runs, and Lahoud, like Nieuwenhuis, had no official at-bats in his debut with the team.

Andrew McCutchen went 3-for-5 at the plate with a pair of RBI doubles, helping the Pirates defeat the Padres, 11-5. McCutchen’s cold start to the season looks far behind him now – the former MVP had recorded a subpar .188 batting average after 26 games along with 13 RBIs and just five extra-base hits. In 20 games since then, McCutchen is batting .384 with 16 RBIs and 14 extra-base hits; his 28 hits over that span are tied for the most in the National League.