Word is someone got drunk recently and thought it was a good idea to remake this movie.  Not a continuation that could have had a guest appearance by Keanu, ya know, helping with clues on how he stopped the “Ex” Presidents, blah blah – No a full-on reboot!  The remake we neither wanted nor needed, and wait until you see this trailer – should have called it something else besides “Point Break”!  Called it something else like, Jason Bourne’s Fast and Furious Twilight Adventure 10.  They took something that was simple and fun and made it moody.  I’m gonna stick up for younger me and boycott this movie purely based on principle.  How do you replace the magic of Swayze, the awkwardness of Keanu and the bat-shit-craziness of Busey?  What’s next a remake of Roadhouse?  Is someone out there intentionally trying to ruin titular movies of our youth, just for CGI cash-grabs?  This movie fails to have the gang wear the ex-presidents masks, and it is also not centered around surfing, like the original – it’s more nonsense about international markets and youth soccer – than some bruddahs searching for sum toasty-tubular waves looking out for 50yr-storms.  Even the catch-phrase: do you know how many laws you broke? Gravity? Are you serious?!  This is just cookie-cutter junk – Delroy Lindo being the stereo-typical police-chief – throw in some stunts and let the story fill itself out – just like The Last Action Hero (except that was making fun of itself).  Is Hollywood all out of ideas?  I’m so angry that I need to watch the original a few times, just to get the taste out of my mouth, because I might have thrown up a little. 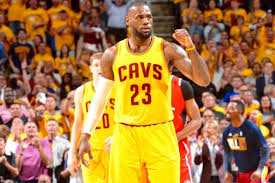 James does it again

LeBron James finished the Cavaliers’ four-game sweep over the Hawks averaging 30.3 points, 11 rebounds and 9.3 assists per game. James is the first player in NBA history to average 30/10/9 in a playoff series of any length. Honorable mention to Oscar Robertson who averaged 33.4 points, 12.4 rebounds and 8.6 assists for Cincinnati against Boston in a seven-game series in 1963.

The Cavaliers swept the number one seed Hawks in the Conference Finals. Cleveland is only the third team under the current payoff format (since 1983-84) to sweep a playoff series against the top seed from its own conference. The Lakers swept the Spurs in 2001 and the Nets Swept the Pistons in 2003.

Derick Brassard scored three goals and added two assists as the Rangers avoided elimination with a 7-3 win over the Lightning. Brassard is only the third player in NHL history to record a hat trick and at least five points in a road game in which his team faced playoff elimination. Lanny McDonald (three goals, two assists) did it in 1977 for the Maple Leafs at Pittsburgh in the final game of a three-game series won by Toronto. McDonald scored or assisted on all five goals scored by the Leafs in a 5-2 win. Greg Paslawski did it for the Blues at Minnesota in 1986 (three goals, two assists).

Brassard is the fourth player in Rangers history to record a hat trick in a game in which the Blueshirts faced playoff elimination. Frank Boucher did it against Toronto in the 1932 Stanley Cup Final, Ron Duguay against Philadelphia in 1980 and Mark Messier in the “guarantee” game against New Jersey in 1994

Clayton Kershaw has allowed three or fewer runs in each of his last 29 starts at home, the second-longest streak of that kind in major-league history. Doc White had a 32-start streak of that kind for the White Sox spanning the 1905 and 1906 seasons, when the team played at South Side Park. (Comiskey Park didn’t open until 1910.) The third-longest streak is by Adam Wainwright, who allowed no more than three runs in each of 28 straight home starts spanning 2009 and 2010 at Busch Stadium.

Prince Fielder had another three hits and three RBIs for the Rangers on Tuesday night (26pts-DK) giving him 14 hits and 15 runs batted in over his last five games. Over the last dozen seasons the only other major-league player with at least 14 hits and 14 runs batted in over a five-game span is Alfonso Soriano for the Yankees in August 2013 (15 hits, 18 RBI).

Donaldson a 48 on DraftKings

Josh Donaldson went 4-for-4 with two homers, four runs batted in and five runs scored. Donaldson is the second player in Blue Jays history to go 4-for-4 or better with at least four RBIs, four runs scored and two homers. Carlos Delgado did it against Tampa Bay on September 25, 2003 (4-for-4, 4 runs, 6 RBI, 4 HR).

One of Donaldson’s homers was in the first inning and the other was a three-run walkoff blast. Only two other Blue Jays hit a first-inning homer and a walkoff homer in the same game: Otto Velez on May 4, 1980 and Reed Johnson on June 15, 2003.

Yankees drop a deuce in the first inning

Mark Teixeira hit a two-run home run in the first inning and the Yankees cruised to a 5-1 victory over the Royals. The Yankees have scored two-or-more first-inning runs 14 times this season, four more such first-innings than any other major-league team. The Bronx Bombers are 10-4 in those 14 games.

Jeff Locke did not allow a run in 5.2 innings pitched continuing a recent trend of excellent starting pitching for the Bucs. Pittsburgh’s starting pitchers are 5-0 with a 1.06 earned-run average over the last five games. The last time the Pirates’ starting pitchers went 5-0 with an ERA that low over a five-game span was in August of 1977 (5-0, 0.69 ERA). The Pirates starters in those five games were John Candelaria (twice), Bruce Kison, Jerry Reuss and Jim Rooker.

Kyle Seager hit a grand slam in the eighth inning and a game-winning homer in the tenth inning in the Mariners’ win over the Rays. Seager is the sixth player in Mariners history to hit two homers in the eighth inning or later in the same game. Donnie Scott (1985), Jim Presley (1986), Jay Buhner (1992), Russ Davis (1999) and Michael Saunders (2012) also did it.

Matt Holliday‘s RBI-single in the first inning extended his reach-base-safely streak to 42 games tying the modern franchise record to open a season which was set byAlbert Pujols in 2008. It was the 20th time this season that Holiday extended his streak in his first plate appearance of the game.

The Tigers beat the A’s, 1-0, in Oakland on Tuesday night. It was the first 1-0 win the Tigers have ever had in a game played in Oakland. Tuesday night’s game was the 257th between these two teams in Oakland, including the playoffs.

Jason Castro‘s two-out double in the seventh inning broke a 1-1 tie in the Astros’ 4-1 win over the Orioles. Castro entered the at-bat with a .138 batting average with two outs and runners on base this season (4-for-29).

Madison Bumgarner improved his record to 9-1 in games played in May over the last two seasons. That’s two more May wins than any other pitcher over that span.

–Elias with the assist