Posted on May 18, 2015 by Logan Cartwright Lucid Sediments Aside 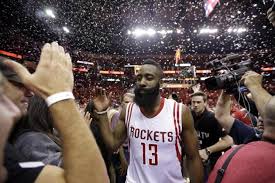 In honor of the 100th post – we decided to look back and re-post our 10 most read.  But before we get to that – How do the Clippers allow the Rockets to win the series and why all the confetti Houston?  It was a second round series – you’ve been there before, act like it.  Is this youth soccer and everyone gets a trophy, with a side of orange slices?  Our Republic could be caught in a vortex of dumb that we may never pull out of – at least we get the fight we wanted to see – Ali v Frazier=Curry v Harden – right?

Sediment-al 1. Satchmo the Great called it The game was billed, the Pope v President, Jazz v Blues, The Ditka Bowl, etc…and the men of the BigEasy held onto their hopes for the glorious tournament, too serve Beignets+Gumbeaux to weary travelers in the 1st round.  Aside from marching up and down Soldier Field, the real…Read more

A spiraling helix that rockets downward at godless velocity is called a Vortex.  One that helixes straight up is a Tornado.  They may appear different, but to philosophers of Physics and Quantum Mechanics, they are both the same thing. Both will kill you instantaneously.  The contrast between being inhaled by a bottomless sinkhole and getting…Read more

Getting DiRTy Congratulations to the newest inductees of Major League Baseball’s HOF, ((as diagnosed by the patronizing Baseball Writers of America (BBWA – isn’t baseball just one word – thus making it BWA – Ballers with Attitude)), Randy Johnson, Pedro Martinez, John Smoltz and Craig Biggio.  A worthy class and the largest inducted since 1955…Read more

Fear and Loathing at Carnival… When the going get weird the weird turn pro, as Raoul Duke famously said, and I am a 7-time gold medalist on this caravan.  Still awake and doing my damndest to earn another shot at the medal-stand; I have yet to sleep from properly marking Lundi Gras with a Red…Read more

A Lion never roars after a kill… The American Dream is a national ethos, it is a set of ideals that include the pursuit of happiness, life and liberty.  It is said that life should be better, richer and fuller for everyone with the opportunity for each according to ability or achievement, regardless of social…Read more

The Past is a statement, the Future a question.  Hopes rise and dreams flicker and die.  Love plans for tomorrow and the widowed think of yesterday.  Life is beautiful and living is hardship.  The sound of music flows down a dark street.  Like a tornado ripping thru your home and granting passage to a whole new world…Read more

Justice, is supposed to be blind.  It seems like it has been a awhile since we have seen the scales tip as they should.  Life’s virtuous dance is a comedy of errors, frequently performed with you walking home one night; and a young derelict asks you for a smoke – you don’t, so you apologize…Read more

It was April 2nd, 1996 and a peppy kid dreamed to be exactly where he was now – except no one really dreams of being in Cleveland.  The city by the lake isn’t the kind of place where dreams come true in sports – hell, nothing good in Cleveland has occurred in the form of championship…Read more

Let’s do the time-warp again… A good craftsmen never blames his tools and a league should never blame theirs.  Much as a violin can not play a concerto by itself, a ball cannot do anything but sit there until the laws of physics apply to an object at rest. So the NFL, in the midst…Read more