what the day after feels like to the uninitiated

Still truckin’ and without sleep, I shall descend into the depths of slumber and await the visions of hours past cascading my cortex with rivulets of joy.  Then I’ll drive back home.  Consult with my attorney, because we may have a whole new set of issues to deal with…But on with the DiRT in your morning coffee…

The Yankees are sell outs…

Word is, the Yankees are retiring more numbers and placing more plaques in Monument Park.  Now the Yankees have a storied history and clearly have some that are deserving; but Pettite, Posada, Bernie Williams and Willie Randolph?  These are all-timers? Remember when retiring your number meant you died AND were great – or just all-time-generationally great?!  The Yankees might run out of numbers – because after they retire Jeter’s – and they will – no player can wear a single digit – the lowest number goes to 11.

I guess if your gonna sit thru this upcoming season, suffer thru the saga of A-(f)Rod; a few marketing ploys will take your mind off the C.H.U.D.S. on the field.

Kobe comes out in GQ…

that Finals patch is so looooong ago

Kobe says he has no more fuQs-2-give, and looking more and more like an A-hole.  Has he thought about which Montana cabin he’s gonna evacuate to when he retires?  Watching his post-basketball-career could be as much fun as A-(f)Rod’s.  You really have to feel bad for his wife, because if he says he doesn’t have any “real” friends, she’s gonna be spending a lot of time supervising Kobe’s roundtable, (#TeddyBearTeaParty).  Here are some excerpts about friendship – best of luck out there Mamba:

So how much are you willing to give up? Have you given up the possibility of having friends? Do you have any friends?

So is this a choice? Are you actively choosing not to have friends?

Well, yes and no. I have friends. But being a “great friend” is something I will never be. I can be a good friend. But not a great friend. A great friend will call you every day and remember your birthday. I’ll get so wrapped up in my shit, I’ll never remember that stuff. And the people who are my friends understand this, and they’re usually the same way. You gravitate toward people who are like you. But the kind of relationships you see in movies—that’s impossible for me. I have good relationships with players around the league. LeBron and I will text every now and then. KG and I will text every now and then. But in terms of having one of those great, bonding friendships—that’s something I will probably never have. And it’s not some smug thing. It’s a weakness. It’s a weakness.

Betrayed by bad knees and never withered from the pressure in New York, was let go and is expected to sign with Dallas soon and get a shot a ring.  Good for him.  New York knew what they were getting when they signed Stoudemire as a free-agent and when healthy, got solid play from Amar’e.  He’s better off getting out of that sinkhole, but does he have to be so cheezy?  Exhibit A:

NY NY what a beautiful city

A place where you can hang out with Anna, JayZ & Diddy

Its a place absent of excuses and patience

If your smart, you can meet leaders of every nation

Everything in NY isnt always what it seems

In the land where the jungle is concrete

…word is he might have strained a tricep patting himself on the back…Is Dallas a front-runner now?

When I get back I’ll check the situation of the guy working on our NBA fantasy info.  When I left him, he had plenty of food and water and said he was close to solving it… 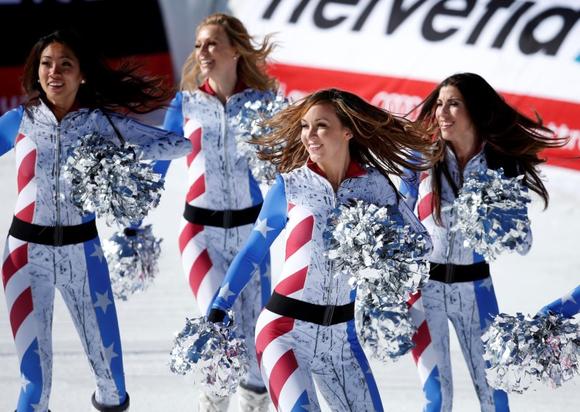 Marketing – not sure how, when or why somebody felt this was needed – but this is ‘Murka and who doesn’t want to see beautiful women representing their country.  Ok, but who are these women really that say they want to dance outside in snow-boots?  Could they not wear their Uggs at the strip club, make more money and remain warm?

They have names like, Dee, Ashlee, Phearri, Rockshanna, Pi, Ashley and Brassel – They have bios and life motto’s like: “Work Hard, Play Hard: it’s like YOLO but with a brain and accountability” – r u sure?  They have special talents like being able to touch their nose with their tongue and applying lipstick with their boobs – just like Molly Ringwald!  Sure they could run Zumba circles around any of us but think how much different it is to cheer at altitude.  Ashley told, Amanda Ruggerri (freelance journalist), : “The elevation is a huge challenge, for sure…Just to breathe, to get through a minute and a half routine, is one thing in Denver. It’s another thing when you get up to Beaver Creek. And then it’s a whoooole other thing when you put it in the snow, because you’re using all of your stabilization muscles.

“And your voice,” she adds. “In 20 seconds, you can be out of breath just cheering, and trying to get the crowd to cheer.” – *<gasp!> the horror (added for effect)

Clearly it means this is now serious business and we were just waiting for the iron will of a few ‘dancers’ to make it all happen.  Now if we can just do something about those outfits being a bit more spangly…

8 thoughts on “Day After Sediment”