Posted on January 12, 2015 by Logan Cartwright college football, nfl Aside

…and now there is innuendo that he played with a torn right quad??

Whatever THAT was last night, appeared to be nothing more than a torch-passing ceremony.  Would anyone have thought the Denver Broncos would have been better off with Andy Dalton, or even Tim Tebow in that game, because I thought it – watchin all those over-throw-mahas.  How does Ware and Miller not get to Luck, ever?  What kind of gameplan was that?  Thankfully it is snowing so there won’t be AS many people jumping off Lookout mtn today.  But with all that said, if Elway had any balls – he would fire everyone and let god sort ’em out – go with a clean slate.  The experiment failed and Fox proved once again what every NFC South fan already knew – Elway, it’s time to usher in the Osweiler era.  For Broncos fans, it might be time for you to get comfortable, as it might be a looong couple of years.

The rest of the games were less of a trainwreck and had their own flare.  The Cowboys now understand how the Lions feel – Karma, it’s gonna getcha – for all of Flacco’s postseason sweetness, he sure soured when he was most needed – and how awesome was the Im-inelligble-play?  That might cinch it for McDaniels getting another head-coaching gig – SF/ATL we are looking at you – and Seattle looks like they are poised for a repeat.

The NFL needs to now figure out how we can stop each playoff-season from some sort of outrage.  Either there are to many rules, or too many rule changes that cause the public, the announcers etc., to not know what the call is or should be, further devolving the audience into raving-conspiracists.  Me?  I love it because my dog is not in this hunt – he was put down a few weeks ago – so I bathe in all the degenerate-gambling-glory that is playoff-football – speaking of nonsense, can anyone from the NFC South beat the Seahawks?! – it’s getting old. 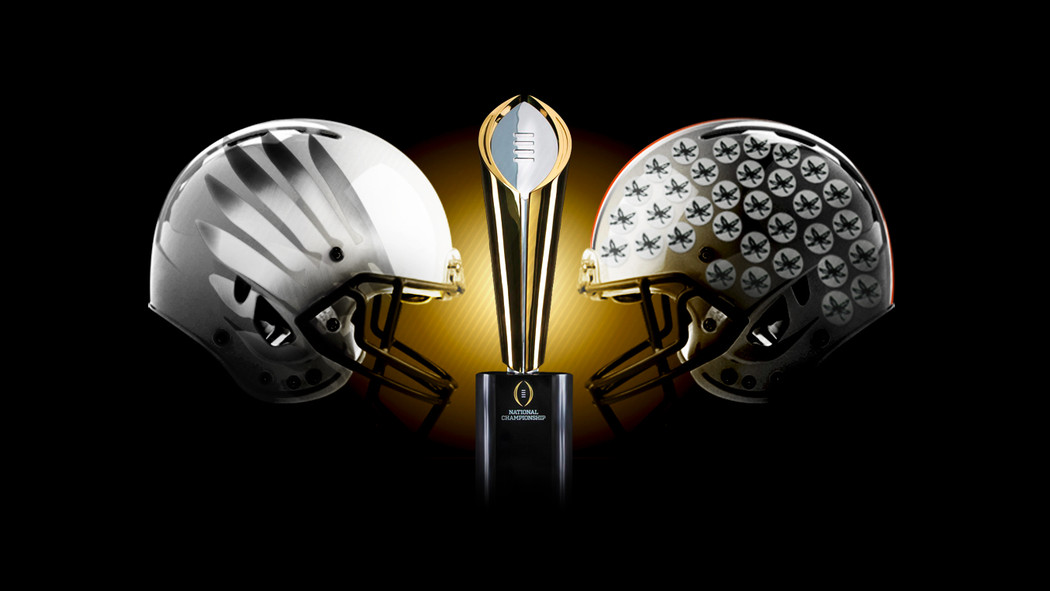 This IS Monday Night Football!!!  Here are several things to consider for tonight’s game:

1. NIKE: Expect to see a calvacade of Nike gear being hustled tonight as both teams are sponsored by Nike, (all 4 CFP playoff teams were) and it could be a free showcase of “what’s new” – available in green, yellow, silver, red or black.

2. ‘Zeke Elliot against the Ducks front seven: Oregon is 51st in rush defense this season and in his last two games has rushed for over 200+yds.  The game could come down to this and how well does Oregon stop the run of ‘Zeke and Cardale.

3. Ohio State front seven: The defensive line must control the line of scrimmage and maintain their assignments.  Oregon has trouble with big, strong, athletic D-linemen (SEC, Stanford) and the Ducks O-line has not had 4 consecutive games with everyone playing together, so it is critical for Ohio State’s front seven to show up if they are to have a chance at slowing down the Ducks.

4. Darren Carrington: Is suspended for the game for failing a drug-test.  He is Oregon’s second-leading receiver with 37 catches for 704 yards and 4 TD’s.

5. Cardale Jones: The last time a Ducks team saw this kind of QB was the last time they were in the Nat’l Championship game.  If Cardale plays like that, Oregon may find similar results.

6. High Ratings: This might be the most watched college football game of all time and could eclipse the NFL playoffs.  Vegas is already reporting this is the most bet college game ever, so…let’s grab some snacks and enjoy this.

7. Heisman curse? If Mariota wins it will be the 7th consecutive post-season victory for the Heisman winner, unlike before when the Heisman was a curse.  Will it culminate with Oregon’s 10-yr-title-quest or Big (not)Ten bragging rights?

8. Urban Meyer: Is 5-0 as an underdog in these type of games – win this one and he elevates above Nick Saban with the coaching job he did this year, adding a 3rd title to his resume and becoming the second coach in history to win titles at two different schools/conferences – First being Saban (same conference).

9. Dome Depot: Ohio State has played their last two games in a dome – Oregon has not all year.  The enclosed atmosphere could make it really difficult on a team not accustomed to the acoustics of indoor football.

10. Last 5 games: Neither team has faced a similar opponent, like the one they face tonight – for all of Oregon’s uptempo-ness, Ohio St runs on average 72 plays a game, compared to Oregon’s 73.  Expect the Ohio St D to be familiar with tempo from their own practices.

14. 1939: was the first National Championship tournament-game in basketball and it featured Ohio St losing to Oregon, 46-33.  In today’s college football, that could be the score tonight.

Tonight is showcase of style with a dash of toughness thrown in for that lil’bit extra.  The Pac-12 has been the better conference and the job of Urban Meyer getting this team ready to compete with multiple QB’s has been amazing.  The numbers all point to an Oregon victory, but to me it comes down to which defensive line can generate pressure and make the most plays.  I think 6pts is to much, so I would take Ohio St in this game and with a slight lean on the OVER.  However, just like I said when Oregon played Florida State regarding the spread – seems like somebody knows something we don’t know and we should probably go with that somebody.

The DiRT Canon A.i. says Oregon is 3pts better than Ohio State – we shall see – ENJOY!