What we learned this weekend… 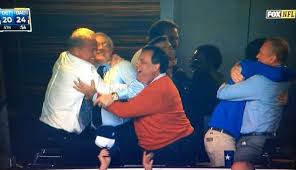 How awkward is this? That’s Gov.Chris Christie, apparently trying to frisk Jerry Jones for BearClaws.

The NFL wants to expand the playoffs and after this weekend, with what you saw, (if you watched) you’d have to ask why.  Before the Dallas/Detroit game the NFL provided as much drama and excitement as a preseason game.  Unless you were gambling – we were – or playing FanDuel – we did – or had a rooting interest in any of the outcomes, could you really say it was fun to watch?  Granted, Saturday is not a typical NFL day but when your first 3 playoff games get out-watched by each of the CFP games – you might want to rethink the idea of diluting your product further with more teams – especially after all the outrage over the NFC South champion, who just might play in the NFC championship game – just sayin… 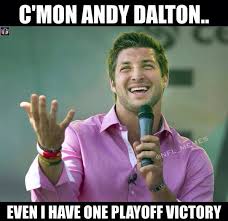 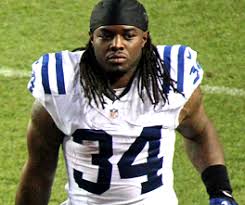 Plays as himself in Madden, still cant find the hole…

Didn’t you used to be Trent Richardson?  Remember the trade the Colts made to Cleveland for him?  Wow has he been terrible.  The former top-five pick couldnt make the field yesterday and was listed on the injury report with an illness earlier in the week.  Yeah, he’s got cant-find-the-hole-itis, and because of that got benched for Dan Herron who gave the Colts over 100 total-yards and a touchdown.  Expect the Colts to drop him at the end of the season and move on from his 3.1 YPC in 29 games to find another stable-pony in the draft or free-agency.  Normally that kind of trade could have hurt an organization for awhile, but then again you gotta have Luck. – see what i did there?

must be a pattern

With the Colts win over the Bungals, we now get to see Manning v Luck.  It’s not like those two are getting into a cage match, but the sports media will hype it as such, because it’s the new boss doing what the ol’boss did – just win baby.  There’s a lot riding on this game for the both of them because – Luck has to show he is ready to keep climbing that ladder and Peyton’s legacy will further slide if he does not hoist another trophy.  Luck already is the better QB and is on his way to being elite, but the Broncos have the better team so it will still be entertaining to watch.  Is it me or has Jim Irsay been really quiet lately? #OffTheMeds.

Speaking of Tom Brady, we know that each year/team is different and that Ray Lewis aint walking back into the Ravens locker-room, – I bet he is thinking about it – so for Tom, it still has to weigh on his mind a little that he is 1-2 against the Ravens in the playoffs.  We know this – the Ravens are not scared of the Patriots.  John Harbaugh and Joe Flacco are 10-4 in the playoffs, with a more impressive 5-0 in first round games, so this will be fun to watch and see if we get ANOTHER Manning v Brady. 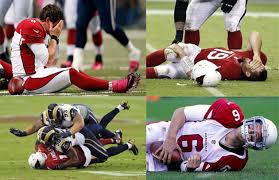 You have to admire the toughness of the Arizona Cardinals.  Last year they go 10-6 and do not make the playoffs.  This year, beset by injuries like a plague, finish 11-5 and go to Carolina to rack up 77 total yards – worst ever.  If you watched that game, then you saw the Card’s with a chance – if not for Ginn’s fumble or the 2 redzone INT’s thrown by Lindley – being up at halftime, 14-13.  Arizona has a lot of talent and who knows what they could have accomplished without those injuries/suspensions/concussions etc…Not too beat a dead horse but this game gave me a serious case of LSU flashbacks and what it’s like without any kind of QB.  Carson Palmer and the rest of them are not going to be the answer for the future, so you must wonder how big they will push in free-agency or the draft to get a solid starter at the position for right now.  It could be worse, you could have been the guy who played Michael Bush in FanDuel. #IwatchFootballBro. 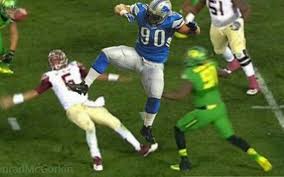 Suh at the Rose Bowl

To me, the current state of the NFL and it’s recent legislation of the rules, compared to those of the halcyon days of glories past, has stirred this outrage.  The biggest mistake made by the officials was throwing the flag in the first place – no flag no issue – picking it up was the problem.  Blame Stafford for under-throwing the ball – blame the refs for not calling a penalty on a helmet-less Dez Bryant being on the field; when you slow down the play, show me the egregious-interference – then watch a really terrible pass-interference call and tell me which one is worse – the point being, is the refs should never decide/influence the game.  That isn’t the play that cost the Lions the game – it could be you forgot the 10-yard shanked punt, or the Lions D giving up a 4th and 6, followed by the game winning TD, then with 2 minutes left, being tits-on-bull useless on Offense.  So while some are crying conspiracy, let’s remember the Raiders are still the only team that truly lost a playoff-game nefariously, #RIPTuckRule1999-2013.

The dawning of an Empire