In what is typically called Black Monday in the NFL we have already seen several dismissals.  how many more could there be before the day/week is done?

Bears – fire Marc Trestman and the GM Phil Emery.  Trestman, the media proclaimed QB guru, was 8-8 and 5-11 as a coach and saw Jay Cutler get worse.  Phil Emery is the guy who decided to pay Jay Cutler all that scratch.  Trestman in his grand delusion, thought he was still going to retain his job – this after losing to the vikings and no touchdowns were scored.  It would be hard to see Trestman get another Head Coaching job in the NFL, and I am not sure he could get a QB coach or O-Coordinator job either, considering that dwarf-star-implosion we witnessed this year.  A good coach would have to take a desperate-housewives-type-chance on Trestman, along with that team’s offense needing to be DYNAMIC, to repair his self-inflicted-damage.  Otherwise it is back to the CFL for Marc.

Jets – fire Rex Ryan and GM John Idzik.  This was clear as day, and Rex had his last hurrah for the Jets and Idzik had to go with him.  Does it seem more like a PARDON from the Governor then an actual firing?  The owner of the Jets had some nice things to say and stayed classy, but is now conducting a search for replacements with the help of Charlie Casserly and Ron Wolfe.  This seems more like a restoration project than a rebuild or quick-flip.  The Jets have a solid D-Line and Geno has played well, (who saw that against Miami?) since taking over for Vick, but does he work harder at getting better and how much does the new GM and Head Coach have to say about Geno – it’s not like he’s RGIII.

Falcons – fire Mike Smith.  GM Dimitroff may not be far behind, so this decision clearly came from the Home Depot.  The Falcons best coach in their 49 seasons of playing da-foos-ball continued to degrade in his management of a team that has contention-type Offensive talent.  The D was terrible but played good in stretches and the O-Line had to contend with a ton of injuries.  It won’t take long for the next guy to be looked at like a savior because this team is not as bad as their record.  Next year, whomever is the coach, will be Fool’s Gold; but none of it will matter if they look like the 2012 team.

49ers – Harbaugh is gone and it was reported yesterday – by several sources like this one csnbayarea.com – that he had already accepted the Michigan job.  The last time the 49ers had this kind of stretch was ’95-’98, so be careful what you wish for.  With the potential rumored replacements, it might be even longer for this Bay-area team to be relevant.  For Harbaugh, he goes back to his Alma-mater and resurrect a dying program.  However, you wouldn’t know it by the Detroit-Free Press’ headline.  Maybe the Michigan job is gonna be a lot more difficult than we thought? 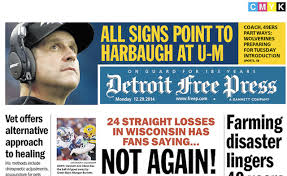 Giants – retain Tom Coughlin after going 6-10.  You would have to believe the spark generated by OBJ is what helped Tom keep his job.  All OBJ did was become the R.O.Y. – (if not, then what a joke) – tie Michael Irvin’s record of 9 games with 90+ yards receiving, (a NFL record that took Irvin until his 8th season to get, OBJ his first) – score 12 touchdowns in 12 games.  The Giants got too 6 wins by running off two 3-game win streaks, one of them being in the last 4 games of the season.  So now what for the Giants?  Victor Cruz will come back and the the D will have to find a way to limit the big-plays that killed them all year – but think of the potential of that offense or could it be a puzzle with to many mouths to feed?  The what-if game is tricky because, what-if Jarvis Landry, Jeremy Hill and OBJ had stayed at LSU?

The Best in Team (their)History? 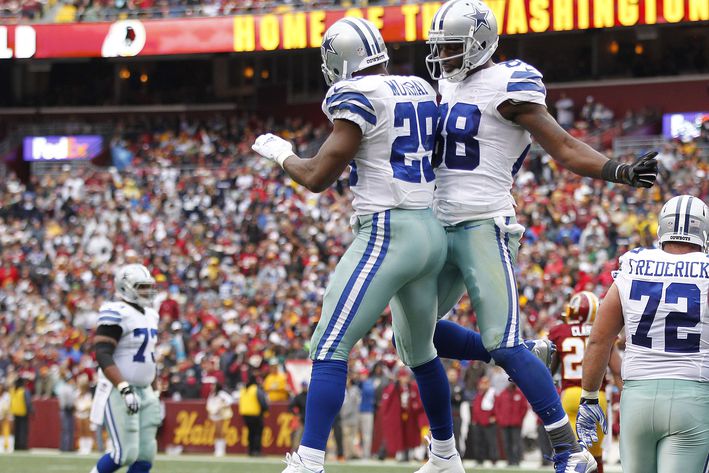 The Cowboys throttled the Fightin’ Americans in what could only be an attempt to gain precious mo’ and swagger heading into the playoffs.  Remember in 2007 when the ‘boys were 11-1 and coasted the rest of the season to then get bounced by the Giants?  Need proof of how serious the Cowboys were in trying to exorcise demons and announce their presence with authority – how about an onside kick with 11:30 left in the second quarter after being up 20-7.  Jason Garrett, playing his starters was a statement to the team that players play and the importance of maintaining a winning attitude.  It could also have been a statement on the new triplets, sans rings, but team records.  DeMarco Murray eclipsed Emmitt in Yards, #of 100yd games and total yards from scrimmage in a season.  Dez Bryant surpassed Terrell Owens for most receiving touchdowns in a season.  Tony Romo passed Troy Aikman last week and moved up further on the all-time passing yards list and threw his first interception of December this year.  The NFL’s second season tournament will determine the faith needed for what this team might accomplish, if this 3 is ever to contend with their past. 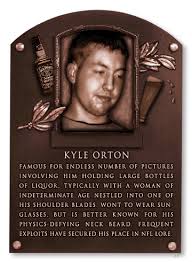 Kyle Orton, at 32, has decided to be a Dad and stay home with his family, and just like John Elway, he went out with a W.  Let us pause and reflect on all those special-moments we shared, watching uncle Rico…like that one play he made when he…or that throw to that guy when…that game in the playoffs when…Kyle Orton was a decent QB out of Purdue and was always the guy in the last-man-on-earth scenario; like the NFL version of FKM (got benched for Tebow).  For now, the future is all on the Bills ownership and what do they do with EJ Manuel; or who else is gonna play the role of Uncle Rico, (only one other QB on the roster, Jeff Tuel)?  You’d have to wonder the direction of this franchise considering they do not have a first round pick in 2015.  However, just like Michael Corleone in Godfather III, I’m sure someone is gonna pull him back in.  Until then, all we’ll have is that highlight reel and those Wonder Years to get us through.

Seeding is now official.  The Seahawks and the Packers both have a bye, with Seattle taking the #1 seed with the best 12-4 record of all other 12-4 records – there can only be one.  Dallas and Carolina both host a playoff game with Dallas hosting Detroit and Carolina hosting the Cardinals.  It’s probable that Carolina goes to Seattle and then plays in Jerry-World for the NFC championship, after Dallas beats Green Bay.  In the AFC, New England and Denver both get a bye, with New England keeping their #1 seed with a loss against Buffalo and having a better 12-4 record than Denver – there can only be one.  Pittsburgh and Indy both host a playoff game with Pittsburgh hosting division rival Baltimore and Indy hosting AFC North alternate Cincy.  No matter what happens either Indy or Pittsburgh will travel to Denver and from there it is safe to say that we could get another Peyton v. Tom for the AFC crown.

The non-playoff team draft order is set for the first 20 picks of the first round of the 2015 NFL draft, and Tampa, you are now on the clock.  Consider (in)Famous Jameis Winston to be the 1st pick and the only QB in the top 10.