In your face, space coyote!

1. Geno and the Jets 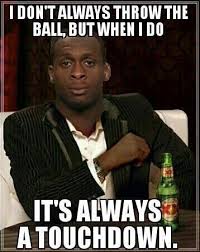 at least he’s not Vinny Intercepta-verde

Like a Shallow Hal sequel, Geno is delusional.  Geno believes that being more consistent is all he needs. Geno said that he has shown flashes of pro-bowl-iness. Maybe that’s the gift of a part-time education at West Virginia.  Geno, under those criteria, I too just missed being drafted and playing centerfield for the Rockies. I too, missed the chance to star alongside Bruce Willis in DieHard 2(die harder) if only….It’s great you believe in yourself and more that you have the balls to say it, and those must be the biggest, brass-iest, swingin-est pair ever, if you think you are anything close to a pro-bowl caliber.  Since you play in New (jersey)York and New York is sometimes called Gotham, you should pay attention to the advice of Gotham’s most famous…”it’s not who you are underneath(or believe), it’s what you DO that defines you.” Einstein’s thoughts on insanity certainly apply to you right now.

2. Lifestyles of the Rich and (de)Generate

If you’re a degenerate gambler(for entertainment purposes only) like most of you I know, then you will appreciate knowing what side you should bet for the weekend.  Early next week I will have a Bowl-a-palooza-‘stravaganza that will outline the winners of such classic, inspired institutions of higher learning.  Bowl institutions like: The Emerald Nut Bowl, The Weed-Eater, something-something-Beef-O-Brady.  Here are the outcomes of week15 of the Not For Long:

Miami @ NE -7.5[opening line] – Miami won the first meeting down in the sweltering heat earlier in the year.  The DiRT sez NE wins the game, but the probability of covering the spread is low.  The right play would be to tease the Patriots and possibly the OVER.

GB @ Buf +6[opening line] – Buffalo has a good defense and the question is, is it enough the way Rodgers&co are playing lately?  Buffalo is at home so that gives them a chance.  The DiRT sez it’s going to be closer than the spread, and to stay away.  If you must, bet the UNDER. [Green Bay wins the game].

Oak @ KC -9.5[opening line] – KC got exposed on a moist Thursday night, but how much worse could it have been if Latavius had more than 3 carries before exiting with a concussed grape.  So now it’s the rematch and if you remove the whoopin’ the Raiders got in SaintLoo, they have a winning streak. KC is still in the hunt for the playoffs and will want some payback; however the DiRT sez KC wins but does not cover, bet Oak.

Jax @ Bal -12.5[opening line] – This seems simple right, Jax is not very good and a rookie QB who is struggling, going on the road?  Yet the Edgar Allen’s have a deficient secondary and no Hey-load-ee Not-gonna-play-no-more cloggin’ the middle.  The DiRT sez it might be closer than the line and to stay away.  If you must bet, tease the Ravens and the UNDER.  [Baltimore wins the game.]

Hou @ Ind -7[opening line] – Andrew Luck is on fire and throws that pig-bladder all over the yard, and especially to TY.  The DiRT sez that the Texans will need to round up a better D and run the rock to keep it close.  Indy wins the game but bet the OVER.

Pit @ Atl pk[opening line] – This is a classic tale of two teams and starring (possibly) Julio Jones.  If JJ can play this will be an entertaining shoot out.  The DiRT sez the Steelers win the game, as do the hopes of s(A)ints fans.

Cin @ Cle pk[opening line] – Let the era of Johnny Foos-ball begin, the ultimate wildcard.  The DiRT sez to stay away.  If you must bet, tease the Browns. [Cleveland should win the game.]

Was @ NYG -6.5[opening line] – The Giants D is good and does it really matter who is the QB for the Fightin’Americans?  I think Dan Snyder is trying out his impression of Al Davis.  The DiRT sez STAY AWAY and if you must bet, bet that there will be at least 2 INT’s.  Otherwise tease the UNDER. [New Jersey’s Giants win the game.]

TB @ Car -5.5[opening line] – Cam is gone and the kitties have a chance.  Derek Anderson lit up TB in the first game and you have to wonder if they care.  The DiRT sez this will likely be a FG goal game, so tease the Panthers. [Carolina-on-my-mind wins the game.]

NYJ @ Ten -2[opening line] – Man this game is bad and only those who have players in the fantasy-playoffs care.  Of course if you have any of these guys, how are you in the playoffs?  If you want to bet(for entertainment purposes only) this game then by all means, its your mortgage.  So if you must, The DiRT sez tease the OVER.  [Tennes-seein-is-believin wins the game.]

Den @ SD +3.5[opening line] – Denver has tried to get tougher and run the ball more lately and you have to wonder if it is throwing off Peyton’s rhythm.  Peyton struggles in San Diego(german for…) for some reason, and both teams are positioning themselves for the ‘offs. The DiRT sez Denver wins and covers the line, bet the Donkeys.

Min @ Det -7[opening line] – Detroit still has a shot at the division, but could they be looking ahead?  The DiRT sez this game will be closer than the number and to bet the UNDER and/or tease Detroit. [Detroit wins the game.]

SF @ Sea -3.5[opening line] – Is this the football-version of the Bataan Death March for Harbaugh and do his players care?  In another battle of Sparta v Persians, choose Sparta.  The DiRT sez Seattle wins the game but the hook could be the difference, so tease the ‘Hawks.

Dal @ Phi -3.5[opening line] – The Cowboys are already talking about how they struggle in December and they have to find ways to change that…huh? For Sunday night there is  a ton of factors to consider like; ReauxMeaux/Sanchize, DeMarco/LeSean, Chip/Jason, etc…Usually you’d want to go with the better coached team, especially when that team is at home.  The DiRT sez take Philly and the points on Nat’l TV.

NO @ Chi +3[opening line] – Uggh! 3 points on the road is a lot – but if the Saints’ D shows up like the last 2 times on the road AND if Jim-MAY stops playing like Charmin then the Saints cover – but Jay Cutler.  The DiRT sez stay away, but if you must bet tease the da’Bears. [Saints win the game].

Let me know your thoughts and good luck gambling for entertainment purposes only.