1.  If you saw Monday Night Football you saw several performances.  You saw a first half dominated by the Packers, then saw a lil fight left in those Fal(i think i)cans.  However you still saw certain elements of why it is possible that Mike Smith is going to be looking for work.  To often this year, (and years of xmas past) he’s demonstrated the kind of vapor-lock of the mind to have you doubt if he’s also not related to Eddie, (Sh!**ers Full!).  It’s towards the closing minutes, you score a touchdown, you need to go for two to have a shot, and you run? from under center? with ‘Quizz Rodgers? No full back? Empty set?  Coach in your effort to out-think the room, you might have out-thought yourself.  Good luck in the Spring, you seem like a nice guy and if I remember, you were a good defensive coach – not so sure where that went.  Also, if Matt Ryan is the answer I am sure I am confused with the question.  He has, (in my mind) the best WR in the league.  If Julio Jones is healthy, and it’s rare, he dominates everyone.  So, how is it that Matt Ryan waits until week 13 and week 14 to let it rip and get him the ball?  Anyway, the NFC (going)South is still up for grabs and thanks to the s(A)ints; we’ve given the Panthers a chance.  The Next time, the Falcons are on National T.V., you might wanna tweet along with the O.G.B.M.F., Jules was killin it and servin up a Royale with Cheese of ‘Shut da’FuQ-up’ to Chucky.  Take a look.

If Gruden says the Birds are in trouble, it must be Gospel! PFUCK Him!! RISE UP!! Remember this Mr Gruden,

Rodgers coulda got away , but Gruden was swingin’ on his Nuts!!

What IS that fool Babbling about?! 4 hitches & nobody hands the ball off better, I think he’s sippin’ Rodgers’ Jockstrap Tea!

Hey, hold up. I dig Rodgers! Bona Fidel BMF! Anncrs should be impartial, not slobberingly eating out one team or the other!

You Packer fans Do Know , yur EXPECTED to win this game. Us Bird fans are lookin’ for a MIRACLE! Might as well watch for it!

That was some Pop Warner tackling!! No offense to Pop Warner Kids, they prolly woulda hung on…like Gruden on Rodgers …

2.  The Heisman Trophy finalists were announced and not since waaaaaay back in 2012 have we only had 3 finalists.  Can you remember those salad days of watching a young prodigy giving the fingers to everyone on his way to the bronze paperweight?  Where have you gone Johnny Football?  The Heisman trophy is the most overrated award I can think of right now.  It IS NOT given to the best football player, it is given to the best participant on offense and 63% of the time the last 30yrs it has been a QB.  Remember Jason White and Troy Smith and Chris Weinke….I might have just thrown up a lil in my mouf – that is what makes this absurd – there is no way those guys were the best in college football, they just had the best participation, not to mention a top 5 team.  C-Dub (Charles Woodson to the unintiated) was the best in 1997 and look at what he is still doing – the man is awesome and clearly has the best commercial in a long time.  But we are here again and here’s how it stacks out.  It should go to Amari Cooper, because if you thought Julio Jones was good then you must not have been watching SEC football.  The kid is elite and will be at the next level (not saying that should be the criteria) with these stats: 115 catches, 1656 yds, 14TD.  It will not go to a WR, as the position has not won a Heisman since 1991 (Desmond Howard).  It will skip the running backs and go to Marcus Marriota as a lifetime achievement award.  He’s got the numbers, however what big game has he won?  Guess we will see in the new tournament #hungergames.  The other thing that gets me, is football at all levels is pass-happy.  It used to be that if a RB ran for 2000 yds he was a lock to win.  This year we have 2, (Melvin Gordon-2336yds, Tevin Coleman-2036yds)?!!  Melvin Gordon only needs a big 333yds in the Outback Bowl to break Barry Sanders’ record.  It’s a lot, but so was 408 on Nebraska.  Tevin Coleman did not get an invite and so we will see some more 2000-yd casualties on the floor of that most hallowed institution of insanity. 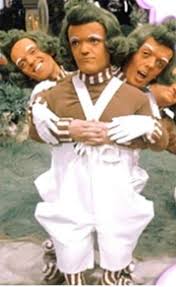 3.  How awesome is that?!  Thank you Marvin Lewis.  Yesterday Marvin Lewis said that, “You’ve got to go defend the offense,” Lewis said. “You don’t defend the player.” After a short pause, Lewis then added: “Particularly a midget.”  He of course gave the (un)sincere apology and meant no offense, (to Andy Dalton?).  Is he apologizing to Manziel or to them, the lil people?  I would have kept going on Johnny Clipboard, make him sweat a little more before his first start.

4.  So the Veterans Committee chooses not to elect anyone into the H.O.F. with candidates that have the resume to get in.  I never saw them play but I would believe that Tony Oliva should be in, considering he finished 1 vote shy, (who’s the a-hole?).  Clearly there has to be some sort of collusion with the former players on this committee not wanting more players in because it hurts their cash-grab or past beefs that haven’t been squashed, or they are just really good at rooster-blocking.  2013 did not elect anyone either and that was nonsense.  Clearly the system is broken and I say we bring back the BCS to elect H.O.F., members, it’ll be right more often then the “humans” #skynet.

5.  Apparently the pet-Rox and the Me(h)ts almost had a deal for a few seconds and that leaves me wondering on what is gonna happen next with Tulo, CarGo, and Stubbs.  I say considering that ownership never took the time to look, interview, or ask around for new GM candidates, and hire from within the organization for a lap dog, then blow it all up.  Trade Tulo, Trade CarGo, who cares about Stubbs, and let’s really see what the new boss (same as the old boss) can do.  To me the solution is get guys that pitch like they DGAF, and hand out HGH like Halloween candy to the hitters and play ol’timey Coors baseball.  Make this again the place that other pitchers hated to pitch at.  Make it so terrifying that they have the meat sweats days before arrival.  Besides neither Tulo or CarGo know what it means to play a full season together and right now it’s just time to see just how far down this rabbit hole can go.