Posted on December 8, 2014December 10, 2014 by Logan Cartwright Lucid Sediments Aside

The DiRT CANON is the cultivation of information to assist you with winning your fantasy games, and to provide a light-hearted approach to events around us.

1.  See what had happened was… 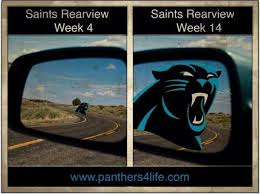 You would think that at some point the s(A)ints would act like they want to win, (at home, the division…) more than the other guys when they are in their friendly confines.  Especially against a team you shellacked on the road.  Especially against a team that had(not now) all but hung it up for the year.  Instead the s(A)ints laid an egg, AT HOME, AGAIN to the Panthers.  Is (not)New Orleans trying to get to the playoffs and get a high draft pick?  Who knows and no one saw this kind of loss coming, except for maybe that place in the desert that builds monuments to bettors’ instincts.  It used to be called the ThunderDome and if they do not straighten it out in 2 weeks; it’s gonna be called (h)Dome Depot.

Not sure how the refs called a fumble on Travis Kelce.  If the call on the field was a catch, (and you need indisputable evidence to overturn) then how was it overturned and called a fumble.  I’m not a Ref, (and I have stayed in a Holiday Inn) but he looked down to me.

3.  Clash of the (first place)Titans

That’s 2003 and that is what could happen tonight if Rodgers doesn’t-discount-double-check his relaxation time.  On paper it’s a mis-match, but that’s now these games are played.  The NFC South is terrible, and with that horrible(bosses) division 3 teams still have a shot at the playoffs regardless of what happens tonight.  I’m with the Joker(TDK) on this and cheer for the chaos.

Is finally here and how about that committee giving the finger to the BIG(not)XII.  Regardless of where you fall in this house divided, you would have to believe that not having a conference title game, naming co-champions, and out-of-conference-strength-of-schedule lead to Ohio State being a bit froggy.  Speaking of strange things being a-foot:  How is an UNDEFEATED, returning National Champion, not a #1 seed?  Further, the issue is the expansion project that must occur now.  It must expand to 8 teams and the only way you still maintain the importance of the regular season, (unlike college basketball) is nominate the 5 (power)conference champions and 3 wild cards.  This will give you a guarantee that you’re in if you win your conference.  That means, you win your conference having played in a conference championship game, and that means you Big(not)XII.  Get the requisite number of teams, hold a conference title game and then you can complain.  Until then, bring back the BCS, because that would have given us Florida State versus’ Alabama. 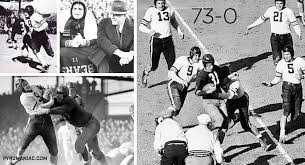 in 1940 and on National Radio, the Chicago Bears defeat the Washington Fightin’ Americans 73-0 in the NFL championship.